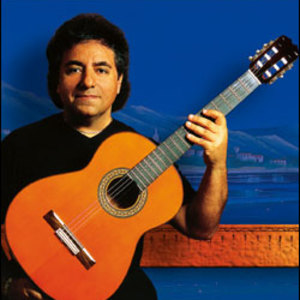 Armik, a prolific Iranian-Armenian flamenco guitarist and composer of bravura, guitar works enjoys great popularity around the world. As a guitarist, he is one of the most adulated virtuosos of the Nuevo Flamenco genre, having attained this stature by virtue of his commanding presence among Billboard Magazine's Top Ten New Age Artists of 2004, 2005 and 2006. His recordings emphasize the prodigious technique that he constantly hones.

Armik was born in Iran of Armenian descent. When he was just seven years old, he pawned his watch for a classical guitar, which he hid and practiced on in the basement. Formal music lessons followed and Armik completed a rigid instructional regimen in just two years. At 12, he was a professional recording artist. While his early career focused mostly on jazz, Armik discovered the beauty and passion of Flamenco while visiting and studying in Spain during the 1970s when he saw the legendary Paco de Lucia perform. Driven by a fire for the tradition that has defined his musical life ever since, the young musician immediately switched from his Jazz guitar for an in-depth journey to the heart of Spanish music.

He moved to Los Angeles to pursue this new direction, playing with other artists live and in the studio. By 1994 he released his solo debut album RAIN DANCER, a critical and commercial success that he followed with 1995's GYPSY FLAME. At this point, Armik's reputation as a performer and student of flamenco was such that expert Spanish luthier Pedro Maldonado created an instrument for him, the Rubia; Armik's 1996 album was recorded with, and named after it. The following year saw the release of MALAGA, and his fifth album, ISLA DEL SOL, appeared in 1999, followed by ROSAS DEL AMOR in the spring of 2001. 2002's LOST IN PARADISE was a sensual and elegant album that offered a slanted take on his traditional style. His releases have consistently reached top ten positions on Billboard's Top Selling New Age Charts, and during the 2004 Summer Olympics in Athens, Greece two tracks from Armik's recordings were played during the floor exercises to accompany gymnast Daniela Sofronie of Romania.

Armik continues to blaze his Nuevo Flamenco virtuosity around the world as the owner of the Bolero Records imprint. As an artist and executive, his route to becoming a success was not all about making music as art, but in knowing what to do when THE big break comes your way. Armik's approach to business is as skillful as his dexterous use of custom-made guitars and just as masterful.

Since its inception, all of Armik's recordings on the Bolero Records imprint have charted above the top ten rung on the Billboard New Age ladder of success including the best selling debut, LOST IN PARADISE. The recording paints a lush landscape of a unique style Armik calls "Latin gypsy jazz," joyfully blending classic elements of rhumba, cha-cha, bolero, jazz, and, a bit of bossa nova. AMOR DE GUITARRA followed in 2002 followed by three top ten hits in 2004 ? ROMANTIC DREAMS, TREASURES and his first recording featuring a piano performance titled PIANO NIGHTS.
2005 proved that lightning could strike twice in the same spot with CAF? ROMANTICO and MAR DE SUENOS both peaking at Number 4 on the Billboard New Age chart.

DESIRES ? THE ROMANTIC COLLECTION, released in January of 2006, features Armik's romantic muse on a canvas of hits culled from five chart-topping CDs. Its high contrast of rhythmic colors and diverse flamenco patterns, provide a lush, richly diverse collection of songs that beautifully detail Armik's distinctive style and technique.
With MI PASI?N, also released in 2006, Armik displays his musical genius once again with 11 songs that are subtler, richer, but equally charming and passionate in relaying Armik's virtuosic guitar playing. GUITARRISTA, released in 2007, is yet another remarkable example of Armik's guitar excellence and Nuevo Flamenco sophistication.

On BARCELONA (February 2008), Armik's guitar virtuosity embodies the spirits of Spain and the Flamenco rhythms that echo throughout that country and around the world. Each song on this wonderful recording exemplifies Armik's own unique sonic paths and musical visions, which consist of beautiful melodies, exciting musical tapestries and seductive harmonic and rhythmic counterpoint.