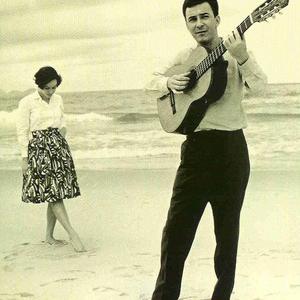 Jo?o Gilberto (born Jo?o Gilberto Prado Pereira de Oliveira on June 10, 1931 in the town of Juazeiro, Bahia) is a Brazilian musician and considered one of the creators, with Ant&ocirc;nio Carlos Jobim and Vin&iacute;cius de Moraes, of bossa nova. A self-taught guitarist and singer, Gilberto moved to Rio de Janeiro in 1950 and joined the vocal group Garotos da lua ("The Boys of the Moon") as their lead singer.

A self-taught guitarist and singer, Gilberto moved to Rio de Janeiro in 1950 and joined the vocal group Garotos da lua ("The Boys of the Moon") as their lead singer. After a year and a half, he was kicked out of the group for his lack of discipline and spent the next several years in a marginal existence. Eventually he found his way, creating a new way to express himself in voice and on the guitar. The result of his obsessive experiments became known as bossa nova.

Bossa nova is a refined version of samba, deemphasizing the percussive aspect of its rhythm and enriching the melodic and harmonic content. Rather than relying on the traditional Afro-Brazilian percussive instruments, bossa nova usually utilizes a drum set. Jo?o Gilberto often eschews all accompaniment, using only his guitar, which he uses as a percussive as well as a harmonic instrument. The singing style he developed is almost whispering, economical, and without vibrato. He creates his tempo tensions by singing ahead or behind the guitar.

This style, which Gilberto introduced in 1957, created a sensation in the musical circles of Rio's Zona Sul, and many young guitarists sought to imitate it. It was first heard on record in 1958, when Jo?o Gilberto accompanied singer Elizete Cardoso in a recording of "Chega de Saudade", a song by Antonio Carlos Jobim and Vinicius de Moraes. Shortly after this recording, Jo?o Gilberto made his own debut single of the same song, followed by the 1959 LP, Chega de Saudade. The song became a hit, launching Gilberto's career and the bossa nova craze.

Besides a number of Jobim compositions, the album Chega de Suadade featured older sambas and popular songs from the 1940s and '50s, all performed in the distinctive bossa nova style. This album was followed by two more in 1960 and 1961, by which time the singer featured new songs by a younger generation of performer/composers such as Carlos Lyra and Roberto Menescal.

By 1962, bossa nova had been embraced by such North American jazz musicians as Herbie Mann, Charlie Byrd, and Stan Getz, who invited Gilberto and Jobim to collaborate on what became one of the best-selling jazz albums of all time, Getz/Gilberto. Through this album, Gilberto's wife, Astrud, became an international star, and the Jobim/de Moraes composition "The Girl from Ipanema" became a worldwide pop music standard for the ages.

Jo?o Gilberto continued to perform through the 1960s, but did not release another studio album until Jo?o Gilberto en M?xico, recorded in 1970 during a period of residence in Mexico. Jo?o Gilberto, aka the "White Album" (1973), featured hypnotic minimalist execution and is widely considered to be his best album. The year 1976 saw the release of The Best of Two Worlds, a reunion with Stan Getz, featuring singer Mi&uacute;cha, sister of Chico Buarque, who had become Gilberto's second wife in April 1965. Amoroso (1977) backed Gilberto with the lush string orchestration of Claus Ogerman, who had provided a similar sound to Jobim's instrumental recordings in the late 1960s and early 1970s. As had been the case for all of Gilberto's albums, the album consisted mostly of Jobim compositions, mixed with older sambas and an occasional North American standard from the 1940s.

Having lived in the US since 1962, Jo?o Gilberto returned to Brazil in 1980. The following year saw the release of Brasil, with guests Gilberto Gil and Caetano Veloso, who in the late 1960s had founded the tropicalia movement, a fusion of Brazilian popular music with foreign pop. The 1991 release, Jo?o, with orchestrations by Clare Fischer, was unusual in its lack of even a single Jobim composition, instead featuring songs in English, French, Italian, and Spanish, plus old sambas and the solitary contemporary song "Sampa" (Caetano Veloso). Also released in 1991 was the album Canto Do Paj? by Veloso's sister Maria Beth?nia on which Beth?nia and Gilberto sing an intimate duet Maria/Linda Flor (Barroso, Peixoto, Vogler, Costa, and P?rto) accompanied solely by his guitar. Jo?o Voz e Viol?o (2000) was an homage to the music of Gilberto's youth as well as a nod to producer Caetano Veloso.

While all of Gilberto's albums since Getz/Gilberto have been released on CD, the first three domestic albums were released in 1988 by EMI on a single CD entitled The Legendary Jo?o Gilberto: The Original Bossa Nova Recordings (1958-1961). The disc also included three tracks from the singer's 1959 Orfeu Negro EP: "Manh? de Carnaval," O Nosso Amor, and A Felicidade, the latter two merged into a single medley track to fit within the recording time of a CD. After its release, Gilberto successfully sued to have the title removed from sale as an unauthorized release of his artistic works.

Jo?o Gilberto has long had a reputation as an eccentric recluse and a nearly neurotic perfectionist. He lives in an apartment in Leblon, Rio de Janeiro, refusing all interviews and avoiding crowds. He has been known to walk out on performances in response to an audience he considers disrespectful or out of theaters possessing acoustics below his standards, and at times demands that the air conditioning be turned off at concert venues. Yet he continues to perform to sell-out crowds in Brazil as well as in Europe, North America, and Japan.