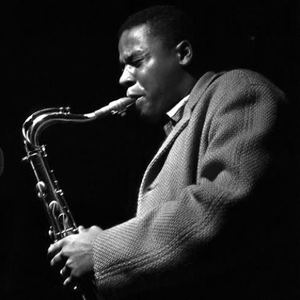 Wayne Shorter (born August 25, 1933) is an American jazz composer and saxophonist. Shorter has recorded dozens of albums as a leader, and appeared on dozens more with others. Many of his compositions have become standards. Shorter was born in Newark, New Jersey, and attended Newark Arts High School. He was encouraged by his father to take up the saxophone as a teenager (his brother Alan became a trumpeter).

Shorter was born in Newark, New Jersey, and attended Newark Arts High School. He was encouraged by his father to take up the saxophone as a teenager (his brother Alan became a trumpeter). After graduating from New York University in 1956 Shorter spent two years in the US Army, during which time he played briefly with Horace Silver, and after his discharge from the army with Maynard Ferguson.

In 1959 Shorter joined Art Blakey & The Jazz Messengers. He stayed with Blakey for five years, and eventually became musical director for the group. In 1964, Miles Davis persuaded Shorter to leave Blakey and join the Miles Davis Quintet alongside Herbie Hancock, Ron Carter and Tony Williams. Davis had been searching for a saxophonist to replace John Coltrane for some time, and the new quintet is considered by many to have been Davis's strongest working group. Shorter composed extensively for Davis ("Prince of Darkness", "ESP", "Footprints", "Sanctuary", and many others; on some albums he provided half of the compositions).

Herbie Hancock had this to say of Shorter's tenure in the group: "The master writer to me, in that group, was Wayne Shorter. He still is a master. Wayne was one of the few people who brought music to Miles that didn't get changed." Davis said: "Wayne is a real composer. He writes scores, write the parts for everybody just as he wants them to sound. He also brought in a kind of curiosity about working with musical rules. If they didn't work, then he broke them, but with musical sense; he understood that freedom in music was the ability to know the rules in order to bend them to your own satisfaction and taste."

Shorter remained in Davis's band after the breakup of the quintet in 1968, playing on early jazz fusion recordings including In A Silent Way and Bitches Brew (both 1969). His last live dates and studio recordings with Davis were in 1970.

In 1970, along with keyboardist Joe Zawinul (also a veteran of the Miles Davis group), Shorter formed Weather Report. Other original members were bassist Miroslav Vitous, percussionist Airto Moreira, and drummer Alphonse Mouzon. Shorter and Zawinul co-led the group until late 1985 with a variety of other musicians, and separately wrote most of Weather Report's material. Shorter also recorded critically acclaimed albums as leader, notably NATIVE DANCER, which featured Brazilian composer and vocalist Milton Nascimento, and Atlantis.

After leaving Weather Report, Shorter continued to record and lead groups in jazz fusion styles, and contributed to several albums by Joni Mitchell. He has also maintained an occasional working relationship with Herbie Hancock, including appearances on several of Hancock's albums, the VSOP band (essentially a revival of the 1960s Miles Davis quintet with Freddie Hubbard substituting for Davis), and a tribute album recorded shortly after Davis's death with Hancock, Carter, Williams and Wallace Roney.

Shorter formed his current band in 2000, the first permanent acoustic group under his leadership. The quartet is composed of pianist Danilo Perez, bassist John Patitucci, and drummer Brian Blade. Two albums of live recordings featuring this quartet have been released (Footprints Live (2001) and Beyond The Sound Barrier (2005)). The quartet has received great acclaim from fans and critics, and the musicians have come to consider themselves family on and off stage. Shorter's 2003 album Alegria received a 2004 Grammy Award for Best Instrumental Jazz Album; it features the quartet with a host of other musicians, including pianist Brad Mehldau, drummer Terri Lyne Carrington and former Weather Report percussionist Alex Acu&ntilde;a.

Shorter's wife Ana Maria and their niece Dalila were both killed on TWA Flight 800 in 1996, and he married Carolina Dos Santos, a close friend of Ana Maria, in 1999. Shorter is a Nichiren Buddhist.

Without a Net (Live)

Beyond The Sound Barrier