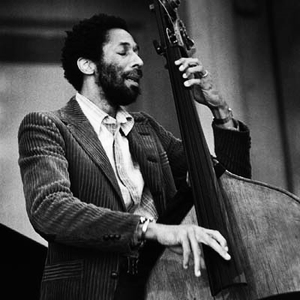 Ron Carter (born May 4, 1937, Ferndale, Michigan) is an American jazz bassist. His unique sound and great swing have made him a sought after studio man ? his appearances on over 2,500 albums make him one of the most-recorded bassists in jazz history. He has recorded with artists ranging from Miles Davis and Wynton Marsalis to A Tribe Called Quest. The epitome of class and elegance, though not stuffy, Ron Carter has been a world class bassist and cellist since the '60s. He's among the greatest accompanists of all time, but has also done many albums exhibiting his prodigious technique.

The epitome of class and elegance, though not stuffy, Ron Carter has been a world class bassist and cellist since the '60s. He's among the greatest accompanists of all time, but has also done many albums exhibiting his prodigious technique. He's a brilliant rhythmic and melodic player, who uses everything in the bass and cello arsenal; walking lines, thick, full, prominent notes and tones, drones and strumming effects, and melody snippets. His bowed solos are almost as impressive as those done with his fingers. Carter has been featured in clothing, instrument, and pipe advertisements; he's close to being the bass equivalent of a Duke Ellington in his mix of musical and extra-musical interests. Carter's nearly as accomplished in classical music as jazz, and has performed with symphony orchestras all over the world. He's almost exclusively an acoustic player; he did play electric for a short time in the late '60s and early '70s, but hasn't used it in many, many years.

Carter began playing cello at ten. But when his family moved from Ferndale, MI, to Detroit, Carter ran into problems with racial stereotypes regarding the cello and switched to bass. He played in the Eastman School's Philharmonic Orchestra, and gained his degree in 1959. He moved to New York and played in Chico Hamilton's quintet with Eric Dolphy, while also enrolling at the Manhattan School of Music. Carter earned his master's degree in 1961. After Hamilton returned to the West Coast in 1960, Carter stayed in New York and played with Dolphy and Don Ellis, cutting his first records with them. He worked with Randy Weston and Thelonious Monk, while playing and recording with Jaki Byard in the early '60s. Carter also toured and recorded with Bobby Timmons' trio, and played with Cannonball Adderley. He joined Art Farmer's group for a short time in 1963, before he was tapped to become a member of Miles Davis' band.

Carter remained with Davis until 1968, appearing on every crucial mid-'60s recording and teaming with Herbie Hancock and Tony Williams to craft a new, freer rhythm section sound. The high-profile job led to the reputation that's seen Carter become possibly the most recorded bassist in jazz history. He's been heard on an unprecedented number of recordings; some sources claim 500, others have estimated it to be as many as 1,000. The list of people he's played with is simply too great to be accurately and completely cited. Carter's been a member of New York Jazz Sextet and New York Jazz Quartet, V.S.O.P. Tour, and Milestone Jazzstars, and was in one of the groups featured in the film Round Midnight in 1986.

He's led his own bands at various intervals since 1972, using a second bassist to keep time and establish harmony so he's free to provide solos. Carter even invented his own instrument, a piccolo bass. Carter's also contributed many arrangements and compositions to both his groups and other bands. He's done duo recordings with either Cedar Walton or Jim Hall. Carter's recorded for Embryo/Atlantic, CTI, Milestone, Timeless, EmArcy, Galaxy, Elektra, and Concord, eventually landing at Blue Note for LPs including 1997's The Bass and I, 1998's So What, and 1999's Orfeu. When Skies Are Grey surfaced in early 2001, followed a year later by Stardust, Carter's tribute to the late bassist Oscar Pettiford. In 2006 another tribute album was released, Dear Miles, dedicated to Miles Davis, also on Blue Note.