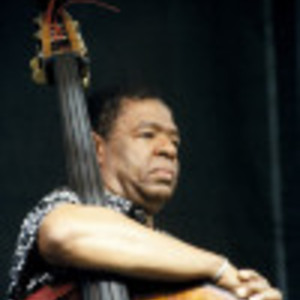 One of jazz's most valuable sidemen, Buster Williams has been able to flourish through many periods of changing fashions in jazz. Best known since the 1980s for his solid, dark tone and highly refined technique on the acoustic bass, the jazz-rock generation knew him as the mobile anchor of Herbie Hancock's exploratory "Mwandishi" Sextet from 1969 to 1973, doubling on acoustic and electric basses sometimes attached to electronic effects devices.

Born Charles Anthony Williams, Jr. in Camden, New Jersey on April 17, 1942. His mother was a seamstress and his father, nick-named 'Cholly', was a bassist, and worked various day jobs to support his family.

"My father was my teacher. He would prepare my lessons for me,'' Buster recalls, "and when I got home from school I was supposed to practice, then he would listen while he was eating his dinner. It was an unwritten law that I had to play it right or hear about it. I was going to be the best. I had no choice. In those days, instead of a two car family, we were a two bass family. My father was a fan of Slam Stewart, and he strung his basses the way Slam did. Instead of the regular G-D-A-E, he strung a high C; ie,C-G-D-A. Adding the C string puts the playing of higher-pitched passages at a more comfortable position. Of course, when he decided to teach me he restrung one of his basses in the traditional manner for me. He told me, 'If I re-string my bass for you, you'd better be serious!'"

He was serious. In 1959 he began working with Jimmy Heath whose quartet included Sam Dockery on piano and the legendary Specs Wright on drums.

"What I learned from Jimmy about music and life was so valuable that bits and pieces of that experience continue to unfold even now. It was like taking a time-release capsule of knowledge."

At 17 he was playing with Gene Ammons and Sonny Stitt, just one month after graduating from Camden High School in 1960, and stayed with them for a year until the band got stranded in Kansas City.

"I was out on the road broke. Gene Ammons had run off with all the money and nobody got paid. Fortunately I, along with the piano player and drummer was able to work a week with Al Hibbler, and thereby earn my train fare back home."

Back home in Camden, Buster took some courses at Combs College of Music in Philadelphia. When Dakota Staton heard him with the Gerald Price Trio, he hired them on the spot. In 1962, he moved on to work with singer Betty Carter, and then Sarah Vaughan, who took him on his first European tour. He was 20 years old, on the French Riviera, and meeting musicians who would figure heavily in his future, like Miles Davis, Ron Carter, Herbie Hancock, George Coleman, and Tony Williams. His big, deep, resilient and inventive playing since then has made him the bassist of choice throughout the jazz world.