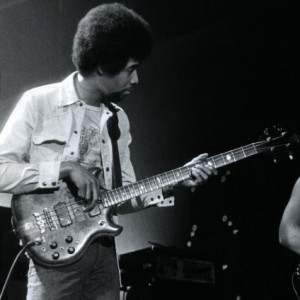 Return to Forever
During this period he joined the jazz fusion group Return to Forever led by pianist Chick Corea. The group became one of the most important fusion groups and released several successful and musically highly varied albums. Clarke also started his solo career in the early 1970s and released a number of albums under his own name. His most famous album is School Days (1976), which along with Jaco Pastorius's self-titled debut is held up as one of the greatest bass albums in the history of Jazz Fusion.

Style
Clarke's electric bass style is a combination of many factors.

Equipment - Clarke has always been very strongly associated with Alembic basses and the vast majority of his recorded output has been produced with one model of Alembic or another, particularly a dark-wood-colored custom bass in the Series I body style. These basses are handmade neck-through instruments made from a mixture of exotic woods and a proprietary active pickup system that is powered from an external preamplifier. Clarke also utilizes full-range amplification for his basses, more in keeping with a keyboardist's rig than a bassist's or guitarists. As a result, Clarke's tone is full-bodied and woody-sounding, with an organic flavor.

Physical size - Clarke is a slim 6'3" and his Alembic basses tend to be short-scale (in this case, 30-3/4" versus a typical 34"), so in his hands, the Alembic seems almost like a toy. As a result, having large hands and powerful musculature in his arms and hands gives him extra command over the instrument in terms of power, range, and speed. Many of the figures that Clarke plays are very difficult for a smaller bassist to play on a larger bass.

Right-hand technique - The classic Clarke right-hand posture has his fingers approaching the strings much as they would on an upright bass, but rotated through 90 degrees. To achieve this, his forearm lies above and nearly parallel to the strings, while his wrist is hooked downward at nearly a right angle. For lead and solo purposes, his fingers partially hook underneath the strings so that when releases, the strings snap against the frets, producing a biting percussive attack. In addition to an economical variation on the Larry Graham-style pop-n'-slap technique, Clarke also uses downward thrusts of the entire right hand, striking two or more strings from above with his fingernails (examples include "School Days," "Rock and Roll Jelly," "Wild Dog," and "Danger Street").

Stanley Clarke is commonly considered among the most important bassists of the jazz-fusion era (c. 1972-1982).

Animal Logic
He formed Animal Logic with rock drummer Stewart Copeland, after the break-up of The Police, and singer-songwriter Deborah Holland. The trio had success with their first album and world tour but the follow-up sold poorly, and the band did not continue.

Today
He continues to work and has several film scores as well as a string of albums to his name. In 2005 he started the Acoustic Fusion Supergroup TRIO! with Bela Fleck and Jean-Luc Ponty, which toured the Eastern U.S. and played all of the major Jazz Festivals.

Biography:
A brilliant player on both acoustic and electric basses, Stanley Clarke has spent much of his career outside of jazz, although he has the ability to play jazz with the very best. He played accordion as a youth, switching to violin and cello before settling on bass. He worked with R&B and rock bands in high school, but after moving to New York, he worked with Pharoah Sanders in the early '70s. Other early gigs were with Gil Evans, Mel Lewis, Horace Silver, Stan Getz, Dexter Gordon, and Art Blakey; everyone was impressed by his talents. However, Clarke really hit the big time when he started teaming up with Chick Corea in Return to Forever. When the group became a rock-oriented fusion quartet, Clarke mostly emphasized electric bass and became an influential force, preceding Jaco Pastorius. But, starting with his School Days album (1976), and continuing through his funk group with George Duke (the Clarke/Duke Project), up to his projects writing movie scores, Stanley Clarke largely moved beyond the jazz world into commercial music; his 1988 Portrait album If This Bass Could Only Talk, and his 1995 collaboration with Jean Luc Ponty and Al DiMeola on the acoustic The Rite of Strings, are two of his few jazz recordings since the '70s. ~ Scott Yanow, All Music Guide

Barbershop: The Next Cut

Jazz In The Garden

The Toys Of Men