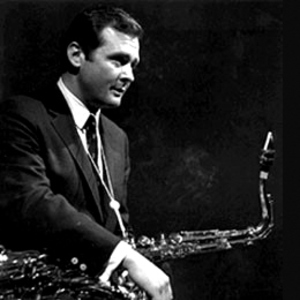 Stan Getz (Stanley Gayetzky, February 2, 1927 Philadelphia ? June 6, 1991 Malibu, California) was an American jazz tenor saxophone player. Known as "The Sound" because of his warm, lyrical tone, Getz's prime influence was the wispy, mellow tone of his idol, Lester Young. His parents were Ukrainian Jews who immigrated from Kiev city, Ukraine in 1903. The family later moved to New York City for better jobs.

His parents were Ukrainian Jews who immigrated from Kiev city, Ukraine in 1903. The family later moved to New York City for better jobs. Stan worked hard in school receiving straight "A's" on average and finished 6th grade close to the top of his class. Stan's major interest was in musical instruments, and he felt a need to play every instrument in his sight. He played a number of instruments before his father bought him his first saxophone at the age of 13. Even though his father also got him a clarinet, Stan instantly fell in love with the saxophone and began practicing 8 hours a day. In 1941, he was accepted into the All City High School Orchestra of New York City. This gave Stan a chance to receive a private, free tutor from the New York Philharmonic, Simon Kovar - a bassoon player. He also began to spend more time playing the saxophone. He eventually dropped out of school in order to pursue his musical career, but was later sent back to the classroom by the school system's truancy officers.

In 1943, he was accepted into Jack Teagarden's band, and because of his youth he became Teagarden's ward. Getz also played along with Nat King Cole and Lionel Hampton. After playing for Stan Kenton, Jimmy Dorsey, and Benny Goodman, Getz was a soloist with Woody Herman from 1947 to 1949 in 'The Second Herd' and he first gained wide attention as one of the band's saxophonists, who were known collectively as 'The Four Brothers', the others being Serge Chaloff, Zoot Sims and Herbie Steward. With Herman, he had a hit with "Early Autumn" and after Getz left 'The Second Herd' he was able to launch his solo career. He would be the leader on almost all of his recording sessions after 1950.

During the early '50s, Getz broke away from the Lester Young style to form his own musical identity and he was soon among the most popular of all jazzmen. He discovered Horace Silver in 1950 and used him in his quartet for several months. After touring Sweden in 1951, he formed an exciting quintet that co-featured guitarist Jimmy Raney; their interplay on up-tempo tunes and tonal blend on ballads was quite memorable. Getz's playing helped Johnny Smith have a hit in "Moonlight in Vermont," during 1953-1954 Bob Brookmeyer made his group a quintet and, despite some drug problems during the decade, Getz was a constant poll winner. After spending 1958-1960 in Europe, the tenorman returned to the U.S. and recorded his personal favorite album, Focus, with arranger Eddie Sauter's Orchestra.

Getz became a central figure in introducing bossa nova music to the U.S. audience. Teaming with guitarist Charlie Byrd, who had just returned from a U.S. State Department tour of Brazil, Getz recorded Jazz Samba in 1962 and it became a hit. The title track was an adaptation of Antonio Carlos Jobim's "One Note Samba". Getz won the Grammy for Best Jazz Performance of 1963 for "Desafinado". As a follow-up, Getz recorded Jazz Samba Encore! with one of the originators of bossa nova, Brazilian guitarist Luiz Bonfa.

He then recorded the album Getz/Gilberto with Tom Jobim, Jo?o Gilberto and his wife, Astrud Gilberto. Their "The Girl from Ipanema" won a Grammy Award. The piece became one of the most well-known latin jazz cuts of all time. Getz/Gilberto won two Grammys (Best Album and Best Single), besting The Beatles' A Hard Day's Night, a victory for Bossa Nova and Brazilian jazz. A live album, Getz/Gilberto Vol. 2, followed, as did Getz Au Go Go, a recording made live at the Cafe Au Go Go. Unfortunately, Getz' affair with Astrud Gilberto brought an end to his musical partnership with her and her husband and he began to move away from bossa-nova and back to cool jazz. Even while still working with the Gilbertos, he recorded Nobody Else But Me an album of straightforward jazz with a new quartet including vibraphonist Gary Burton, but Verve Records, wishing to continue building the Getz brand with bossa-nova, refused to release it. It eventually came out 30 years later, after Getz had died.

In 1972, Getz recorded in the fusion idiom with Chick Corea and Stanley Clarke. This group, without Getz, went on to become the famous Return to Forever, and many of the pieces including "La Fiesta" remained in their repertoire. In this period Getz experimented with an Echoplex on his saxophone, for which critics vilified him. He eventually discarded fusion and "electric jazz", returning to acoustic jazz, while at the same time gradually de-emphasizing the Bossa Nova, opting for more esoteric and less-mainstream jazz. He had a cameo in the movie The Exterminator (1980).

Towards the end of his life the now drug-free Getz had another creative peak with a group including the pianist Kenny Barron, whom Getz described as "my musical other half".

In 1986, he was inducted into the Down Beat Jazz Hall of Fame.

Getz married Beverly Byrne, a vocalist with the Gene Krupa band, on 7 November 1946; they had three children together: Steven, David, and Beverly (who married Michael McGovern).

Getz became involved with drugs and alcohol while a teenager. In 1954, he was arrested for attempting to rob a pharmacy to get a morphine fix. As he was being processed in the prison ward of Los Angeles County-USC Medical Center, Beverly gave birth to their third child one floor below.

Getz tried to escape his narcotics addiction by moving to Copenhagen. He married Swedish aristocrat Monica Silfverski?ld on 3 November 1956 and had two children with her: Pamela and Nicolas. In 1957 Swedish girlfriend Inga Torgn?r gave birth to a son Peter. Stan divorced Monica in 1987.

Zoot Sims, who had known Getz since their time with Herman, once described him as 'a nice bunch of guys', as a consequence of the wide behavioural range of which Getz was capable. In the final stages of his life Getz was able to end his addictions.

Getz died of liver cancer in 1991. His body was cremated and the ashes scattered at sea, off the coast of Malibu, California.

In 1998 the 'Stan Getz Media Center and Library' at the Berklee College of Music was dedicated through a donation from the Herb Alpert Foundation.

Born To Be Blue

The Perfect Jazz Collection: The Best Of Two Worlds