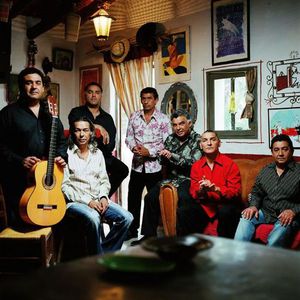 Gipsy Kings is a music group from Arles and Montpellier, France. They explained the evolution of their sound in the 1996 PBS documentary of their lives and music "Tierra Gitana (Gipsy Land)". Young brothers Nicolas, Canut and Paul Reyes accompanied their father, famed flamenco singer Jose Reyes, who started out singing "cante jondo" (deep chant), traditional flamenco with long-running themes of passion, love, death, etc. But they began playing rumba flamenca because "we liked to watch pretty girls dance," said Nicolas.

Latin American beats had been joined with flamenco by gitanos since at least the 1950s, mixing complex strumming with rhythmic, percussive tapping on their guitars' tops. The new Reyes generation ? soon to meet and join up with three guitar-playing brothers from the Baliardo family ? began creating more pop-oriented songs. They played at roma parties and at street corners until they got their chance to record under the group's new name, Gipsy Kings.

Sharp-eyed individuals might have noted that all the left-handed members of the group play guitars strung upside-down; this is usually as a result of the individuals' not having their own guitars when growing-up. Borrowing and playing a right-hander's the wrong way up was the only way to learn.


[edit] Band's story
They became popular with their self-titled first album, Gipsy Kings, which included the songs "Djobi Djoba [1]", "Bamboleo [2]" and the romantic ballad "Un Amor". The song "Volare" on their second album Mosaique is a rumba version of Domenico Modugno's Italian hit "Nel Blu Dipinto Di Blu". The Gipsy Kings were enormously popular in France and throughout Europe along with the middle east. In 1989, Gipsy Kings was released in the United States and it spent 40 weeks on the charts, one of very few Spanish language albums to do so. Their cover version of "Hotel California" is an excellent example of fast flamenco guitar leads and rhythmic strumming (this version was featured in the Coen Brothers' movie The Big Lebowski).

In 1991 the Gipsy Kings provided flamenco guitar and backing vocals on Bananarama's version of "Long Train Running", using the pseudonym "Alma de Noche" ("Soul of the Night"). Also in '91, for a multi-artist project called "Simply Mad About the Mouse" ? a compilation of new versions of songs from Disney films ? the Kings contributed an annaly-crafted, fast-paced rumba flamenca version of "I've Got No Strings" from "Pinocchio" - replete with feverish flamenco guitar leads and rhythmic hand-claps (palmas). The lyrics' enthusiasm for freedom, not being tied down, fit the gipsy creed perfectly.

Their 1993 album "Love and Liberte" won the Latin Grammy Award for "Best Pop Album of the Year," and contained the enduring song "Montana," an emotional account of Roma chased from their birthplace by prejudice and persecution.


Lead guitarist Tonino Baliardo ? who has always written the group's instrumentals ? released his first solo album, Essences, in 2001; a second self-titled one followed in 2003.

Flamenco purists criticized their use of drum kits, electronic bass, and electronic keyboards and rock and reggae beats. Defenders say they helped create a new style.

Gipsy Kings' total album sales worldwide now exceed 18 million; they toured worldwide again in 2007. They are the world's best-selling music group from France in history, according to their website, where dates and places of their current tour can be found.

Years active: from 1987 till present.