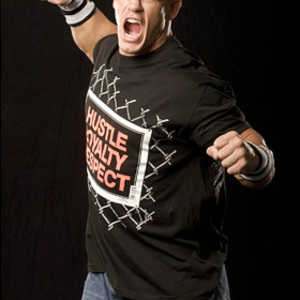 Lauded by fans for his cocky wrestling bravado and style, John Cena quickly rose to fame in the WWE. Whether banking on this sudden rise, a simple love for hip hop, or anything in between, John Cena decided to become a rapper. "You Can't See Me," his most famous gimmick as a wrestler was the obvious choice for his album name. On this, his first recorded album, his style is the same as heard in his "battles" against various other rappers or wrestlers. And so enlisted help from popular underground rappers Bumpy Knuckles and Esoteric and gained a respectful following.

Though many would argue his credibility for various reasons, it can't be argued that he's at least better than most wrestler-turned-rappers before him.

In addition to his time in the ring, Cena is a rap music artist. He performed his fifth WWE entrance song, "Basic Thugonomics," which was featured on the WWE soundtrack album WWE Originals. His track "Untouchables" was featured on Theme Addict, another WWE soundtrack album. His debut album, which he recorded alongside his cousin Tha Trademarc, You Can't See Me features his current entrance theme "My Time is Now". The first single from the You Can't See Me album was "Bad, Bad Man", a music video of which featured a parody of 1980s culture and the television show The A-Team. A second video was later made for the second single, "Right Now", and premiered on the August 8 edition of RAW.

John Cena has worked with several personalities in the Hip-Hop industry, such as Freddie Foxx (Bumpy Knuckles), 7L, Esoteric, Murs (including a music video), E-40 and Chingo Bling. He and Method Man were also featured in SmackDown! magazine and MTV.com. Most recently, Cena and Tha Trademarc are featured on a track by The Perceptionists, "Champion Scratch." Cena has also performed on BBC Two's long running Top of the Pops, becoming the first professional wrestler to do so.

You Can't See Me