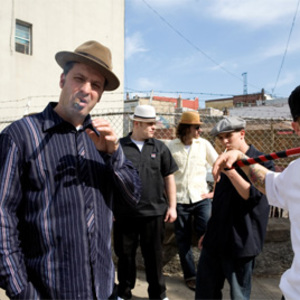 t's been a long journey for the Lordz of Brooklyn ever since their 1995 American release "All in the Family." Mike 'Kaves' McLeer and his brother Adam 'ADM' McLeer form the core of the group. Like House of Pain before them (and closely influenced by Mike's friendship with Danny Boy) the Lordz merged their ethnic identity with their love for hip-hop music; all the while overcoming the adversity of losing their mother and little sister to a tragic case of vehicular homicide in 1994 (to date their killer has yet to be caught and prosecuted).

Despite their honest forthcoming approach to rap music and a "Saturday Nite Fever" song and video which cleverly referenced John Travolta, the brothers found that the road to success was much narrower for them than groups like the Beastie Boys and 3rd Bass before them. After poor sales American released the group and the brothers have been doing projects on their own ever since. They cut an indie release with Freddie Foxxx, ADM produced a remix of the Busta Rhymes/Ozzy Osbourne "This Means War," and shopped around for a second shot at recognition. With the help of Tunnel Vizion and High Times Records in 2003, the Lordz have made a comeback to a second full length distributed nationally in "Graffiti Roc," eight years after their ill fated debut.

In today's market, the Lordz of Brooklyn will probably fare much better amongst an audience familiar with rock groups with rappers like Linkin Park's own Mike Shinoda. The group gravitates between this and the more hip-hop end of the spectrum, often finding an Everlast-like place in the middle. No surprise then that the aforementioned rapper/singer appears on "Sucker MC," the group's tribute to Run-D.M.C. and the fallen Jam Master Jay:

ADM: "Yo we hit you with the one-two-three, three-to-two-one
My name ADM, yo Kaves, make 'em {*Run*}
We do it in the place with the highs and the bass
Rockin to the rhythm, writin graff' on the trains
Go uptown and come down to the ground
You sucker MC's, boy you sad-faced clown
You a five dollar boy and I'm a million dollar man
You a sucker MC, and you're my fan"

Kaves {singing}: "Got a big long Caddy and I like a Seville
And written on the side, is dressed to kill
If you see me cruisin, step aside
Ain't enough room for ya all to ride
It's first come and a first served basis
Coolin out girl, take you to the def places..."

It's a fresh interpretation, bringing the rappers who loved rock full circle through a folksy sound and jammin' guitar. As with most of the album's songs it's an ADM production, although guest stars do occasionally collaborate. Rampage co-produces the updated "Wild for Da Nite" which reinvents the song into something Limp Bizkit might jam to, while DJ Scratch makes a surprise appearance on "ForgetBoutItBoutIt" with Rampage's fellow Flipmodian Busta Rhymes guesting on the cut. And there are more surprises in store if you're not familiar with the Lordz and their respect in hip-hop circles: the "Lake of Fire" remix features Lord Finesse and O.C., and "Misery" features Freddie Foxxx. "Sometimes I Rhyme Slow" references the Nice & Smooth classic for the chorus but is a whole new intenvtion, as is the Korn remix of "White Trash" which rounds out this album.

How listeners will approach this album is ultimately hard to say. A traditionally grounded rap fan might at first be put off by the group's rock tendencies, but can hardly argue with the number of hip-hop veterans and rap tributes on the album. On the other hand, rock fans are probably not that familiar with the Lordz of Brooklyn, and may not at first relate to the hip-hop sensibility these white New Yorkers bring to their own version of today's guitar rap. Between these two though is a happy median that the oft-overlooked L.O.B.'s straddle quite nicely, and it's an album that may surprise people who wrote them off as an industry fluke almost a decade ago.

All In The Family