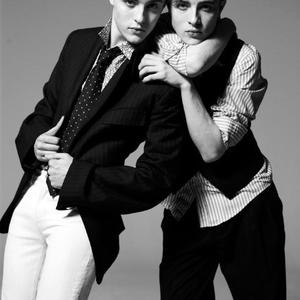 John & Edward (born John Paul Henry Daniel Richard Grimes and Edward Peter Anthony Kevin Patrick Grimes on 16 October 1991 in Dublin), artistically known as Jedward are an irish pop singing duo. Known for their distinctive blond quiffs and unique performances, the identical twins have risen to fame since appearing in the sixth series of The X Factor in 2009, in a phenomenon described as the "Jedward paradox".

They released their debut song "Under Pressure (Ice Ice Baby), a collaboration with 90s hip hop star Vanilla Ice on 31st January 2010. It hit #1 in the Irish singles charts and #2 in the UK singles charts, on downloads alone - the CD single was released on the 15th of February 2010.

They then released their second single, a cover of Blink-182's "All the Small Things", on 16 July 2010, and their debut album Planet Jedward on 26 July. Planet Jedward reached number one on the Irish Albums Chart and number 17 on the UK Albums Chart. It was also certified platinum in Northern Ireland.

Since then, Jedward have been on 3 tours in the UK and Ireland. The first, the 'Planet Jedward tour' hit both countries, with some cities being played more than once, in April and August 2010. The second, was the 'Bad Behaviour Tour' which was just in Ireland, in April 2011. They are due to hold another tour, in August 2011, named 'The Carnival Tour' which is just in Ireland, both the republic and north, with the concert held at night and 2 signings in each place at the day time. After they secured first place in the national selection on The 'Late Late Show' on rt? in 11 February 2011, with their entry single "Lipstick", they then performed in Dusselhorf, Germany in The Eurovision Song Contest, coming 8th place, getting to the 1st place spot then going down during the voting process, beating both the UK's entry 'Blue' and Germany's entry 'Lena.'

In January 2012, they embarked on the European leg of their Victory Tour, playing in Austria, Germany, Sweden, Finland and Estonia.

They have now three albums: Planet Jedward, 2010 (Which was only covers), Victory, 2011 (All their own songs: Lipstick, Bad behaviour, Everyday superstar, Miss america, Biggest fan, Distortion, Pop rocket, Saturday night, Techno girl, Wow oh wow, Celebrity and Hold the world.) and the latest album is Young Love, 2012 Track list: Waterline, Young love, What's your number, Girl like you, Luminous, Give it up, Happens in the dark, All i want is you, What it feels like, How did you know, Can't forget you, P.O.V and three iTunes bonus tracks Cool heroes, Never better and School's out.

They also compete at the Eurovision Song Contest second time in row with hit "Waterline" and performed in Baku, Azerbaijan. After qualifying from their semi-final, they came in 19th place in the grand final. But it's rumoured that Ireland's lines were stuck and so they didin't get all votes that had been called.