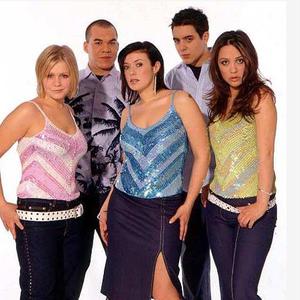 Hear'Say had their 15 minutes of fame as a result of winning the ITV's "Popstars" reality TV talent show in February 2001. After an album and a few singles, Kym Marsh left the band in early 2002 for a solo career. She was replaced by Johnny Shentall, but he failed to inspire. The band split at the end of 2002 as a result of some spiteful negative publicity in the UK tabloid press. The following year Myleene Klass started doing TV presenting and has released an album of classical piano music. She has also become a high profile model for Marks & Spencer.

Kym Marsh's solo career was unsuccessful but she subsequently joined the cast of UK soap opera 'Coronation Street' and remains a major character in the show.
Suzanne Shaw starred in the stage version of 'Grease' before winning ITV's 'Dancing on Ice.' She recently starred in 'Chicago' in London's West End and now has a major role in UK soap Emmerdale.