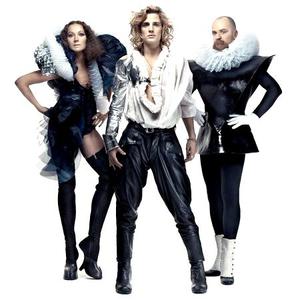 Bodies Without Organs is a Swedish electro pop group, formed in 2004. Since early 2006 they have usually been presented under the shortened name BWO. In Sweden they have enjoyed considerable commercial success throughout their career, so far notching up 13 Top 40 singles, including a Number 1 with "Temple of Love", and four Top 10 albums including a Number 1 with Halcyon Days, and have won several major Swedish music awards.

In the mid 00s, they had significant chart success in several Eastern European countries including Finland, Ukraine and Russia, and in 2008 some moderate success in the United Kingdom, Greece, Switzerland, Germany, Norway and Denmark.

Alexander Bard, whose previous music projects had included Army of Lovers, Vacuum and Alcazar, started work on a new project during 2003, working with the record producer Anders Hansson who became the band's co-producer. They auditioned over 35 different vocalists before meeting former Popstars contestant Martin Rolinski who was duly chosen as lead singer. Marina Schiptjenko, an art-dealer and a one-time member of Vacuum, then came on board as the third member of what became Bodies Without Organs [2].
There was initially a suggestion that the band would be a four-piece including Jean-Pierre Barda from Army of Lovers, but this did not come to fruition, and Barda's explicit involvement extended as co-writing the songs "Living In A Fantasy" [2] (BWO's first single) and "European Psycho", both included on BWO's first album "Prototype" (It's odd that a picture of Barda turned up in the inner booklet of this album), and appearing on the videos "Conquering America", "Sixteen Tons of Hardware", "Open Door" and "The Bells of Freedom", in which Dominika Peczynski, also from Army of Lovers did make a cameo too.
The name of the band derives from the philosophical term body without organs, developed by French philosopher Gilles Deleuze and psychoanalyst F?lix Guattari in their 1972 book Anti-?dipus. Bard, an author and lecturer of philosophy, has referred to the ideas of Deleuze in his books Netocracy - The New Power Elite And Life After Capitalism and The Global Empire, both co-written with Jan S?derqvist.
At no point has BWO been a full-time project for any of the band's members - Bard continues his other career, notable in its own right, as a philosopher, while Schiptjenko remains an art dealer in Stockholm and Rolinski has a Master of Science in Engineering and works in that field.

Sunshine In The Rain

You're Not Alone (CDM)

Lay Your Love On Me (CDM)

The Destiny Of Love

Halcyon Nights (The Remixes Of The Album Halcyon Days)