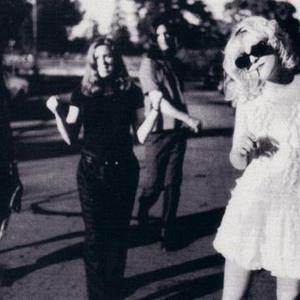 There are two artists known as Hole: 1) the American alternative rock band fronted by Courtney Love, and 2) a British experimental project active in the late 1980s. 1) Hole is an American alternative rock band that initially formed in Los Angeles, California in 1989 by vocalist/rhythm guitarist Courtney Love and guitarist Eric Erlandson. The band went through various lineups through the subsequent decades before its dissolution in 2002, but is now currently fronted by Courtney Love, with lead guitarist Micko Larkin (formally of Larrikin Love)...

1) Hole is an American alternative rock band that initially formed in Los Angeles, California in 1989 by vocalist/rhythm guitarist Courtney Love and guitarist Eric Erlandson. The band went through various lineups through the subsequent decades before its dissolution in 2002, but is now currently fronted by Courtney Love, with lead guitarist Micko Larkin (formally of Larrikin Love), Shawn Dailey (of Rock Kills Kid) on bass, and Stuart Fisher (formally of Ozric Tentacles) on drums.

Hole's abrasive, self-consciously obnoxious style of alternative rock was initially influenced heavily by punk rock and noise rock and had a brief period as a three-guitar lineup, first with Eric Erlandson and Mike Geisbriecht, then briefly with the musician Errol Stewart. The band released two singles, firstly "Retard Girl" in 1990 and then "Dicknail" in 1991, both on independent record labels.

The lineup that recorded the band's first album "Pretty on the Inside" (1991) was Love, lead guitarist Eric Erlandson, bassist Jill Emery and drummer Caroline Rue. The album, which was produced by Sonic Youth's Kim Gordon, was critically praised by rock journalists despite its limited popularity in the United States; overseas, however, the album was a hit within the UK rock scene, and its lead single, "Teenage Whore" entered the UK indie rock chart at number one.

After touring an extensive tour of Europe and the United States, Rue was fired from the band in 1992 and Emery left soon after, to be replaced by Leslie Hardy and Patty Schemel, respectively. Hardy left without contributing to the band, and was subsequently replaced by Kristen Pfaff of Janitor Joe in 1993. This lineup then recorded and released the hugely successful album "Live Through This" (1994) which found the band following a more commercial grunge sound. The album was released in April 1994, and in poor timing, just 4 days after Courtney Love's husband Kurt Cobain committed suicide. Nonetheless, "Live Through This" was massively acclaimed by critics and earned #1 slots in "Best Album of the Year" lists and sold extremely well. It spawned a string of singles, most notably "Doll Parts" and "Violet".

Bassist Kristen Pfaff died of a heroin overdose shortly after the album was released, and the band left the public eye for the entire summer of 1994, dropping out of various festivals and canceling shows. In September the band made their first public appearance since Cobain's death, and Melissa Auf Der Maur replaced Pfaff on bass for their following tour.

The band then took almost 4 years to release follow up album "Celebrity Skin" in 1998 due to Courtney Love's burgeoning film career. During the recording sessions, Patty Schemel left the band and was replaced by a session drummer on the album. "Celebrity Skin" once again found the band taking a different approach to the previous record, experimenting with California-inspired rock and power pop. Billy Corgan of The Smashing Pumpkins, a longtime friend of Love's, helped write the music on several songs on the album. "Celebrity Skin" went on to be the band's most commercially successful album, with its lead single "Celebrity Skin" making it to number one on the Billboard Modern Rock Tracks, and "Malibu" charting at number three. The band toured with Marilyn Manson briefly to support the album, but dropped out of the tour after arguments between Love and Manson on production costs due to Manson's elaborate stage theatrics. The band then toured on their own thereafter, appearing notably at Sydney's Big Day Out Festival in 1999.

Samantha Maloney was hired as the band's drummer on the tour. Melissa Auf Der Maur then left the band in 1999 to join The Smashing Pumpkins. Due to Courtney Love's acting career and legal issues with the surviving members of Nirvana, 2002 saw Courtney Love and Eric Erlandson, the two remaining members of the band, announce the dissolution of Hole.

However, On June 17th, 2009 Courtney Love announced the return of Hole with new members Micko Larkin (Larrikin Love) on lead guitar, Shawn Dailey (Rock Kills Kid) on bass, and Stuart Fisher (Ozric Tentacles) on drums. The comeback album "Nobodys Daughter" was released in April 2010, and saw the band take yet another stylistic turn, focusing on more of a folk rock/singer songwriter approach.

2) John Everall. John Everall or John Severall is most known for his work as Tactile, Spacemarker, Multicide, and Mesh and was the label boss of Sentrax Recordings. Through the years he worked with various artists: Nigel Ayers, Mick Harris, Jhonn Balance, Karl Blake, James Plotkin, Little Annie, Joe Banks, Shane Embury. It's difficult to discribe the sound of Hole; it has some goth, industrial and electronic influences, with some tracks having an In The Nursery sort of sound.

My Body, The Hand Grenade