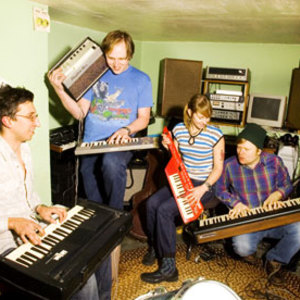 Frog Eyes is an indie rock band from Victoria (British Columbia, Canada), The quartet is led by singer/guitarist Carey Mercer and is known for their highly idiosyncratic songs, which pit Mercer's unhinged, melodic vocals against a swirling mass of guitar, keyboards, and drums. Drummer Melanie Campbell (also Mercer's wife) notably uses a 'found object' as part of her drums set, the so-called "dinger." This object was only used on their first three albums and has since been disposed of in favour of a normal ride cymbal.

Prior to Frog Eyes, Mercer was in Blue Pine, who released one self-titled album and whose unreleased second album was later appended to the reissue of Frog Eyes' debut, The Bloody Hand. Mercer also has a solo project, Blackout Beach, and has released two albums (Light Flows the Putrid Dawn and Skin of Evil) and one single under that name. Different versions of three Blackout Beach songs appear on Frog Eyes releases.

Frog Eyes performed with Destroyer in live shows and on Dan Bejar's album Notorious Lightning & Other Works. This collaboration led to the formation of Swan Lake, a "songwriter's project" with Dan Bejar of Destroyer/The New Pornographers and Spencer Krug of Sunset Rubdown/Wolf Parade.

Tears of the Valedictorian