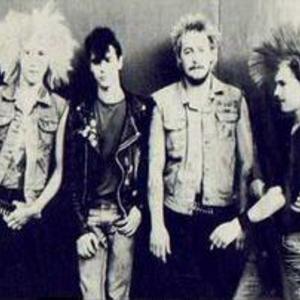 English Dogs are a British crossover punk rock/heavy metal band that began life in the early eighties. They formed in October 1981 in Grantham and produced two demos during 1982 entitled 'Show No Mercy' and 'Free To Kill'. The band toured as support to fellow punk band Charged GBH in Germany during early 1983 and followed this with a British tour supporting Discharge. In 1983 they signed to Clay Records and released a 6 track EP titled 'Mad Punx And English Dogs'.

This change saw them leave Clay records to sign with Rot Records and release the decidedly metal tinged 'To The Ends Of The Earth' EP in September 1984. The metal leanings increased with Forward into Battle. English Dogs , culminating with the 'Where Legend Began' album through Under One Flag in 1986. The group appeared on the legendary Shades promoted Thrash bill at Camden's Electric Ballroom with Possessed and Voivod later in 1986.

Wakey returned briefly to the reformed band to record 1994's comeback 'Bow To None', with him being replaced by Stuart 'Stu-Pid' Jones for the 1995 single on Wretch Records .

Butt created Wardance with ex-Frantix bassist Andy Frantic and former Boys Dream drummer Matt Keys. Dogs forged an alliance with erstwhile GBH personnel in 1997 to create Sensa Yuma releasing the 'Every Day's Your Last Day' album on Retch Records and 7" EP of the same title on Ruptured Ambitions. Another English Dogs / GBH union resulted in Wakey and Pinch creating The Wernt with GBH members guitarist Jock Blyth and bassist Ross Lomas for a 1997 album 'Wreckin' Temples'. Butt replaced Jim Davies of Pitchshifter as the live guitarist for The Prodigy, which in turn revitalized interest in English Dogs and prompted a re-release of Where Legend Began. Butt also announced the formation of a new act Janus Stark the same year recording with ex-Charlie guitarist Terry Thomas acting as producer. 1999's 'I've Got A Gun' was recorded live in Finland at the last ever English Dogs show. By 2000 Pinch had joined The Damned. Gizz Butt returned in 2004 with The More I See.

In May 2007, English Dogs reformed with the original line-up with the exception of Pinch, though he would have liked to join he had commitments with The Damned. He was replaced by Stuart Meadows, who played for Resistance 77. They mainly play throughout Europe, but they do not play their crossover material. English Dogs released an EP called "Tales of the Asylum" in November 2008. English Dogs had another line-up change in the of Summer 2009 then afterward a hiatus. After months of leaving the band, Wakey Wakefield reformed the band with him being the only original member.

The Thing With Two Heads

Invasion Of The Porky Men