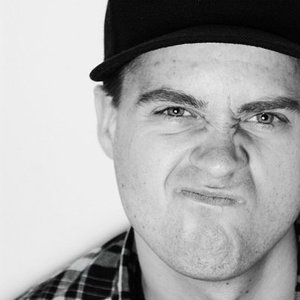 ECID, MC/producer and Fill In The Breaks work horse is one of those rare artists that can rap, write, & produce in an arguably equal fashion. In a time when the ?underground? is much closer to the ?mainstream? and attention spans are leaning towards extinction. Ecid is a lyric's first MC more concerned with making timeless music than songs that bang for the moment. He writes honest, imaginative, visual, story driven songs with an unpredictable style all his own. As a producer he is the definition of an obsessive record digger, never settling for the predictable loops.

Armed with an array of software, samplers, effects pedals, keyboards and an uncanny ear for organic sounds. His sample based/drum heavy beatscapes are the cinematic soundtrack to a zombie-hop apocalypse.

Over the past two years Ecid has cemented himself in the indie-hiphop "scene" Releasing 3 smashing full length albums (2009's "Red Beretta" 2010's "Awol One and Ecid are" and "100 Smiles And Runnin") none of which sounding a lick like the last. The first being a concept album based on the bizarre events that turn a modern day hero into a monster. The second, a gritty collaboration with a Los Angeles legend. Last but not least the most recent being a personal album showing Ecid at his most charismatic, honest, sarcastic, and relatable.

It was summer 2008, life was crazy, ?Red Beretta? was almost finished and after a four year period of non-stop self producing, rapping, & mixing, a period in which he recorded and released ten projects another three or four un-released Ecid needed a break from his creative same old
same old. So he flew to Phoenix, AZ to do some soul searching and recording with his good friend Arsenic on an un-released project called ?Scorpion Killers?. It was during these intense sessions Ecid decided he wanted to step away from the boards to focus solely on writing and have Arsenic produce his next project. After a couple months of weeding through beats and gathering thoughts Ecid wrote ?Beautiful Smile? a song showing us it's okay to fuck-up and it's okay to think you're awesome. It wouldn't be long before a good
fourteen or fifteen songs had been sent back and forth via Gmail.

?Smiles? is an album about remembering who you are and how you got here. It shows us we can grow and rediscover the things about ourselves we forgot were great. It is an album built on the beauty in words with awe inspiring lines like ?I live every day like a seven-ten split sweet talking
good karma cuz revenge is bitch? and hilariously truthful lines like ?As a kid you drink Coke, as a teen you learn to snort it. As an adult you learn to smoke it cuz you can't afford it? Ecid is sure to bring lyrics back just in time for us to forget they matter again.

having charted in CMJ numerous times and currently receiving heavy spins at college radio across the US and Canada, Ecid is taking on the clear channel fed stations next. Not a fan of the radio? Well that's just fine because his production can be found on MTV's "The Real World" and soon enough he'll begin his takeover of cable television as well. Whatever the 27-year old MC has his hands in , he goes all in like a kamakazee pilot on acid and you can be rest assured he will take a few clouds down with him.


"Ecid is playing some really cool audio games with the samples he uses, and some of the production techniques help pull the listener in and keep them there. It's not only a rapper's album, but it's for the production heads too, who will be smiling at the known sounds and scratching their heads at the unknown ones for days, if not months or years."- OKAYPLAYER.COM..

"ESGC is some of the thickest, grittiest, most surreal-ass hip hop you are likely to ever have dropped on you like the proverbial cartoon piano." -INSOMNIAC MAGAZINE.com

"Ecid makes one think, he is David Koresh without the cult or religion. Or maybe Nike without the cyanide. Ecid makes people listen with wit -RIFT MAGAZINE.

"Yup, I did say poetic extremist, because Ecid absolutely goes off. Lyrics take the forefront on this album, and he has a powerful voice and imagination to bring it there. -UGS MAG (ugsmag.com)

"The lyrics are so next level you wish everyone in the room would shut up so you don't miss a line." -MIDWESTUNDERGROUND.org

"Ecid's one of the few Twin Cities MCs to go as far as the almost confrontationally abrasive coastal underground rap mainstays on Anticon and Definitive Jux." -City Pages