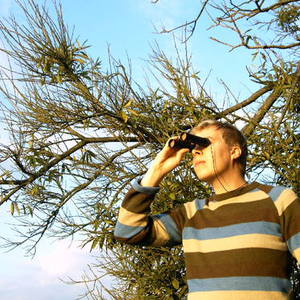 Dominik Eulberg, born in 1978 in Westerwald, Germany is an electronic music artist and DJ who has released numerous singles as well as full-length albums on labels such as cocoon recordings and Traum Schallplatten. He occasionally works as park ranger in German National parks, an occupation he plans to pursue full time in the near future after retiring from music. Dominik's fascination for electronic music began at a very young age.

Dominik's fascination for electronic music began at a very young age. The radio show "Clubnights? with Sven V&auml;th was a major early influence. At the age of 15 he started buying records and learned to DJ. From the very beginning he has given his attention to innovative and experimental records.

In 1995 he bought himself his own equipment in order to give free rein to his creativity and to start appearing as a live act.

Later he ended up in the city of Bonn where he started studying ecological geography. Besides music, nature is the most important thing for him and also provides inspiration for his songs.

His first publications appeared on Matthias Schaffh&auml;user?s label WARE and on Raum Music, a label settled in Frankfurt. Shortly after, he met Riley Reinhold and Jaqueline Klein, which resulted in a collaboration on the labels Traum Schallplatten and Trapez. It is on this label. where his first album ?Flora and Fauna? was published. Further releases on Platzhirsch Schallplatten and Cocoon Recordings come later. Eulberg has also made a name for himself as a remixer, and in the course of that has put noted artists through the acoustic hoop, including DJ Hell, Roman Fl&uuml;gel, Le Dust Sucker, Tiefschwarz, Einmusik and Nathan Fake.

All kinds of sounds of nature set out the repertoire of sounds in his songs and give an organic, vivid character to his tracks.

From the croaking of frogs to the cackling of birds, Dominik Eulberg always finds enough room for singing animals in his songs. That can be seen clearly if you look at some of his track titles, such as for example ?Basst&ouml;lpel? (bass gannet)

2004 Groove Magazine, the specialist magazine for electronic music, made him Newcomer of the year in 2004 and third best producer. His first album ?Flora and Fauna? was elected third best by a reader's survey in the German magazine Raveline and fifth best album of the year for 2004 by both The Groove and De:Bug. Dominik was also nominated for the German Dance-Music Award in the categories ?Best Remix? and ?Best Newcomer?.

2006 Dominik Eulberg was again nominated for the German Dance-Music-Awards in the categories "Best Producer" and ?Best Remix".