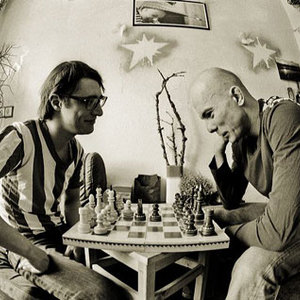 Scsi-9 are Anton Kubikov & Maxim Milutenko. Anton Kubikov was born in 1975 in Moscow. He started his career in 1994 playing at one of the first Moscow techno clubs - Ermitage. From January 1995 until January 1996 he was a resident in Relax club in Moscow. Very soon he became a popular figure at the Moscow DJ scene and was constantly invited to perform at such popular Moscow clubs like Treasure Island, Metro, Moby Dick, Ptuch, Utopy, X-Dance and others.

Anton Kubikov was born in 1975 in Moscow. He started his career in 1994 playing at one of the first Moscow techno clubs - Ermitage. From January 1995 until January 1996 he was a resident in Relax club in Moscow.
Very soon he became a popular figure at the Moscow DJ scene and was constantly invited to perform at such popular Moscow clubs like Treasure Island, Metro, Moby Dick, Ptuch, Utopy, X-Dance and others.
In 1995 he created his own radio show on the popular Russian FM station "Station 2000". This radio station was exclusively devoted to modern trends of electronic music. For more than 6 years this show was the most popular Techno show on the air in Russia. Now that radio is closed DJ Kubikov is focused on Tech-House, Minimal, Deep.
In 1997 DJ Kubikov was focused on his own musical career. His personal projects ScSi-9, MULTIPLIAR, HeroCityMovers, SNOWBOARDER became very popular with the Moscow underground electronic scene.
SCSI-9 are Anton Kubikov and Maxim Milyutenko.

In 2000 Anton and Maxim took their equipment together and built their own studio. In a year Maxim joined Kubikov's most advanced electronic project SCSI-9. They presently produce underground dance music, downtempo and minimal tracks and remixes. In 2002 they recorded their first soundtrack for a theater staging at one of Moscow's drama theatres. In autumn 2002 they played their first live show in Moscow. On November 9th, 2002, SCSI-9 played their first live at the famous Fabric club in London, UK. In September 2003 SCSI-9 played their first Russian live gig outside Moscow at the Privilege club in Chelyabinsk, and now continue touring Russia with live shows. Since then SCSI-9 played numerous live gigs in European clubs in London, Berlin, Cologne, Hamburg, Warsaw, Ljubljana, Madrid, Thessaloniki and on festivals, such as Transmediale (Berlin), Pulse (Moscow), Wilsonic (Bratislava), Dialog of 4 Cultures (Lodz/Poland), in Subotica (Serbia), Athens and on Monegros in Spain, together with Richie Hawtin, Magda and Troy Pierce, Gui Burrato and Matias Aguayo. In 2007 they also took part in the Global Gathering (Kiev) and RADAR Live (Istanbul) festivals.

Since 2001 SCSI-9 publish their music as vinyl EPs, mainly on German labels such as Traum/Trapez, Salo, Freizeitglauben, Morris Audio, Highgrade. In April, 2003 the Force Tracks released their fullsize album 'Digital Russian' (2x12" and CD). In 2004 SCSI-9 released two EPs on Kompakt - "All She Wants Is" and "Mini", and later Kompakt included their track in the famous 'Total Five' compilation. In the "anniversary release", Kompakt 100, where artists of the label put remixes on each other, SCSI-9 was featured with two remixes. Another remix work, "Midnight Traveller", was published in autumn, 2004 by the German label "Highgrade". At the same time SCSI-9 began cooperation with Craig Richards label Tyrant, which published their EP "Location Unknown" in the same year. In November 2005 Anton and Maxim released their On The Edge EP on Kompakt. Their third fullsize album "The Line Of Nine" was released by Kompakt in May 2006, with another release on Kompakts K2 label in autumn 2006. SCSI-9 tracks also appear on Kompakt's famous Total-5, Total-6 and Total-7 compilations. In addition to their work with Kompakt SCSI-9 released a number of records on Highgrade, Neuton Music, Phlegmatek, Klik and the netlabels Fragment and Sutemos.

In 2005 they set up their own label Pro-Tez together with Antons old friend Ed Karapetyan, who has been living in Los Angeles for years. Pro-Tez features intelligent dance, minimal house and ultradeep music by Russian artists, and is distributed by KOMPAKT. After recent releases of D-Pulse, Korablove and De:Se Pro-Tez will continue with it's 9th vinyl featuring Masha Era in October 2008.

The Line Of Nine