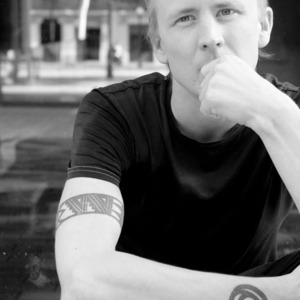 Luomo is the pop-experimental face of Finnish producer Sasu Ripatti (b. 1976). The music of Luomo stretches taut lines between shadowy experimentalism and shining club aspirations of the dancefloor, capturing tension and romance in shards of polished disco. Full of dark chasms and dangerous sharp edges, the restless experimentation and bitter-tenderness in Luomo's songs have shattered and reformed our expectations of pop, songs like ?Tessio' became the foundation of what was soon known as ?microhouse', a genre characterised by minimal clicks'n'cuts cast in grooving bass.

But the pop tropes and shimmering vocals of Luomo smeared over deeply layered backgrounds made it clear that Ripatti was drawing on a wider range of influences to come up with this uniquely re-formed sound, not only glitch, but dub, trip-hop, chicago house, soul and disco. Ripatti groped though dark territory for the 'Vocalcity' (2000) songs. Sometimes fumbling and failing, he presented each element ? icy reverb, stuttering rhythms and brittle synth stabs ?? woven into original, glittering stories with crossover pop appeal that was picked up by major labels.

At the same time Ripatti was recording for Berlin's experimental dub-house imprint Chain Reaction ? a Basic Channel sub label ? and the influential Mille Plateaux as Vladislav Delay, as well as on MP parent label Force Inc. as Uusitalo. What marks out Luomo particularly from these other monikers, aside from a more overt pop orientation, is the extensive, sensitive use of vocal samples from a variety of collaborators. All Luomo albums owe much to processed feminine voices, particularly that of Finnish jazz singer Johanna Iivanainen, a vocalist renowned for her timbral and poetic singing. The production qualities tested in Vocalcity, pensive and polished, were elaborated for Luomo's rich and sensual follow up 'The Present Lover' (2003); the voice of Johanna Iivanainen was again a featured, along with that of Antye Greie (AGF). Ripatti's long fascination with vocals, reached a new nadir as he used them like actors in his music to say old things in new ways: manipulated, mutitracked and processed into teasing fragments.

Several 12? appeared over the next two years including a collaboration with Raz Ohara that paid homage to the pop genius of Michael Jackson, as well as remixes for DFA and Massive Attack among others. During this time he also formed a trio with Antye Greie and Craig Armstrong called The Dolls. Ripatti returned with Iivanainen in 2006 for his third Luomo album, 'Paper Tigers', recognised as his most accomplished to that point. 'Paper Tigers' moved in the hard-won territory between the dark chasms of Vladislav Delay and the over-bright pop ideal Ripatti had been chasing on earlier albums. Behind the gloss and hooks, Ripatti's background as a drummer came to the fore more strongly than ever on 'Paper Tigers' with the stuttering rhythms extended in deeply layered percussive lines. Ripatti's early training as a jazz drummer allowed him to effortlessly create rhythms that evolved subtly and hypnotically to confuse listeners, deconstructing standard patterns with texture and complexity.

Ripatti's creative arrangements, the results of tireless experimentation and search for meaning, have come to fruition in his fourth Luomo album, 'Convivial' (2008). 'Convivial' sees Luomo-as-producer at his most upfront and extrovert, embracing more overt pop motives than ever, and features vocal collaborations with not only Iivanainen, but a spectrum of artists from a range of what could be considered pop-experimentalism. Sascha Ring (Apparat) sings a straightforward, heartbreaking ballad, Jake Shears of Scissor Sisters offers a touch of glam, classic chicago house producer Robert Owens appears on an eponymous track, and Panorama Bar resident Cassy is featured in a club friendly cut. On 'Convivial', Ripatti has taken the Luomo project deeper and broader with collaborations and upfront song structures while retaining familiar Luomo basslines and synth stabs, and without losing the sensitive, experimental touch that is so highly valued in his productions.

Waltz For Your Eyes (Vinyl)