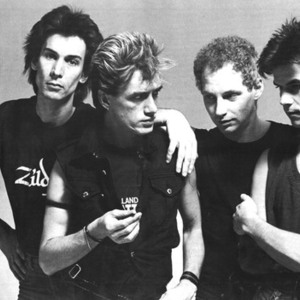 Dutch pop band Doe Maar (1978-1984; reunions in 1999-2000 and 2008-present) is the most popular and succesful Dutch-language pop act ever. Their musical cocktail of pop, ska, punk and reggae was uniquely (sometimes frighteningly) popular in the first half of the 1980s in The Netherlands. Doe Maar (the band name can be loosely translated as 'go ahead' or 'do as you say') recorded five studio albums, with the latter four hitting number one in the Dutch album charts.

Doe Maar (the band name can be loosely translated as 'go ahead' or 'do as you say') recorded five studio albums, with the latter four hitting number one in the Dutch album charts.

Having emerged from a hippie community in the south of The Netherlands in the late 1970s, Doe Maar's self-titled 1979 d?but album was not much of a success. Founding member and original bass player Piet Dekker left the group. Ernst Jansz (vocals, keyboards), Jan Hendriks (guitar) and Carel Copier (drums) were briefly joined by stand-in bass player Joost Belinfante (of hippie/folk outfit CCC inc.) before Henny Vrienten was recruited as the permanent new bass player in 1980.

The second album, Skunk, was released in the summer of 1981, preceded by the lead single Sinds 1 Dag of 2, which didn't enter the charts until radio DJ Frits Spits had pretty much singlehandedly changed the song title into the more catchy 32 Jaar ('32 Years'). Single and album were reasonably succesful, but not more than that. At the end of the year drummer Carel Copier was replaced by Ren? van Collem, who was 20 years of age at the time, more than a decade younger than the rest of the band.

March 1982 saw the release of the album Doris Day en andere stukken and the lead single, Doris Day, which - almost overnight - sparked off 'Doe Maar-mania', a craze unequaled for a Dutch band in their home country, including hysterical and fainting teenage girls during live performances and a brief domination of teen fashion in The Netherlands, with the fluorescent 'phosphor green' and 'lollipop pink' trade mark colours of the Skunk, and an huge market of Doe Maar memorabilia: pins, badges, sweatbands and what not.

Doe Maar were now referred to as 'the Dutch Beatles': very different music, but similar (if not worse) madness.

The Doris Day album had only just disappeared from the top of the Dutch album charts when the two-year old Skunk album hit number one after all. The stand-alone single De bom ('The Bomb') topped the singles charts in November 1982. Typically, the band's young fans hardly seemed to understand what an apocalyptic song it was: "Work for your future - before the bomb drops."

The band members were shocked and not seldomly frightened or depressed by their sudden popularity. They were in their mid-thirties; the hordes of teenage girls that suddenly invaded their private lives were everything but their peers. Doe Maar wrote particularly gloomy songs about topics that you would expect to appeal to 'thirty-somethings' rather than teenagers. Jansz and Vrienten, in particular, received tons of love letters from teenage girls, but also death threats from Dutch Neo-Nazis. They needed bodyguards. Meanwhile, the Dutch music press dismissed Doe Maar as a teenybopper phenomenon: the band was first sneered at and later ignored by Holland's music critics.

In May 1982 the band fired its youthful drummer, Ren? van Collem. His successor, Jan Pijnenburg, was involved in car accident shortly after he was hired. Somewhat bizarrely, the band then hired Ren? van Collem as a stand-in for another six months of live concerts. The definitive Doe Maar line-up was now complete: Ernst Jansz (vocals, keyboards), Henny Vrienten (vocals, bass), Jan Hendriks (guitar) and Jan Pijnenburg (drums). Years later, Ren? van Collem would express his bitterness over the fact that Pijnenburg can be seen on almost all of the band's famous group pictures and is generally regarded as the Doe Maar drummer (especially after the 1999-2000 and 2008 reunions), in spite of the fact that the drum parts on the studio albums are almost exclusively Van Collem's work. He also played the lion's share the band's live shows.

The particularly dark 4US ('Virus') album was released in March 1983 and immediately rocketed to number one, just like its lead single Pa ('Dad'), a rather bitter song about generation gaps. 'Doe Maar-mania' was now at its peak and (during live shows) frequently out of control. The band decided to stop doing interviews, announced complete radio silence and attempted to focus on their next album, but had to conclude that there was no more inspiration. Doe Maar had burned out.

The announcement that Doe Maar was going to call it quits caused grief beyond belief amongst a generation of Dutch teenage girls. The Dutch Kindertelefoon (Childline) had to deal with countless brokenhearted young girls who phoned in to announce their imminent suicides.

The band did two emotional 'farewell' shows in Den Bosch's Maaspoort hall on 14 April 1984. Since then, Henny Vrienten and Ernst Jansz have pursued successful solo careers, mostly in the context of music composition for television and cinema. The band members remained friends and continued to play together on private occasions.

After more than fifteen years of absence -in which their work was rehabilitated by a new generation of music critics - Doe Maar decided to re-unite for one final album: Klaar (which means as much as 'finished' or 'done') was released in 2000. A string of sixteen reunion concerts at Rotterdam's Ahoy sports palace was announced. 175,000 tickets were sold in an eyewink, in many cases to the teenage girls of the early eighties.

In 2007 a theatre musical about the band's music toured the Netherlands and won several important theater awards. The success of 'Doe Maar - The Musical' was followed by another reunion of the band: one more reunion gig is announced for 12 July 2008, at De Kuip football stadium in Rotterdam. 50,000 tickets sells out within the hour, three more concerts are added, all sold out within minutes. In an interview on 20 June 2008, Henny Vrienten states that "this is not a reunion. Doe Maar is back, for real."

A new studio album is announced, but three years later the fans are still waiting...