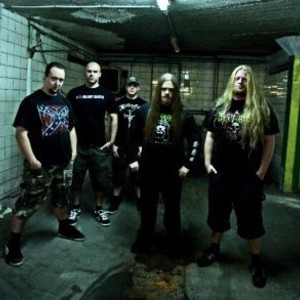 Dawn of Demise are a Brutal Death Metal band hailing from Denmark. Heavily inspired by American Slam Death Metal groups such as Suffocation, Abominable Putridity, and Pyrexia, they have a very old school type of brutality to their music . In 2012, they released ''Rejoice in Vengeance'', which they claim is their most groove infested, brutal, savage album yet. A FORCE UNSTOPPABLE - 2010 The band released its second full-length in january 2010. Right after the band made a musicvideo for the track 'Juggernaut' - which in less than 6 months was viewed more than 30.

A FORCE UNSTOPPABLE - 2010
The band released its second full-length in january 2010. Right after the band made a musicvideo for the track 'Juggernaut' - which in less than 6 months was viewed more than 30.000 times on Youtube. During the next couple of months the band would complete a headlining-tour of Denmark with labelmates The Cleansing and are now taking a break from touring, writing and recording.

LACERATED - 2009
Lacerated was written with Jakob still in the band but recorded as a 4-piece after Alexander was relieved of his duties. After recording the EP the guys auditioned and recruited guitarist Thomas E. as their latest addition. The following summer the band played a fullypacked Astoria-tent at Roskilde Festival and also played that years MTVs Headbangers Ball Tour alongside danish heavyweights HateSphere and Illdisposed.

HATE TAKES ITS FORM - 2008
Having more than 40 concerts under their belt the band started writing their first full-length in mid-2007. Recorded by the band themselves it was later handed over to Jacob Hansen for the mix & mastering. Following the release, Jakob left the band, leaving a spot for young guitarist Alexander K. The band then toured Denmark extensively in support of the new album and also won award for Best Live Act at that years Danish Metal Awards.

...AND BLOOD WILL FLOW - 2006
Inspired by bands like Suffocation, Meshuggah and Nevermore, Bj?rn Jensen and Martin Sorensen formed Dawn Of Demise in early 2004 with the addition of guitarist Jakob Nyholm, vocalist Scott Jensen and drummer Kim L. Jensen. Right away they began playing gigs and creating a name for themselves before recording and releasing their 3-track demo '...And Blood Will Flow'.

Into the Depths of Veracity