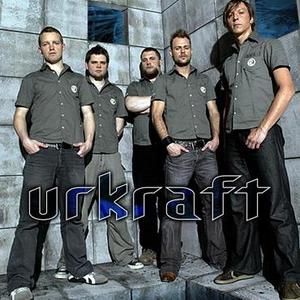 Founded in 1995 by vocalist/guitarist Thomas Stromvig Pedersen, guitarist R. Mork, drummer Mikael Skou Jorgensen and bassist Jeppe Tander, Denmark's Urkraft embarked upon an experimental journey through the depths of thrash metal. The name, translated in Scandanavian/German as ?primordial' or ?primitive' force immediately establishes Urkraft's belief in the importance of their music. Following years of experimenting with their sound and their dynamics as a group...

Following years of experimenting with their sound and their dynamics as a group, in 2000 Urkraft recruited Cacophony guitarist Thomas Birk and in 2001 took Tommy Neperus on board as a keyboard player for their live shows, before establishing Jeppe Eg's position as a full time keyboardist in the same year, to enhance the band's sound. As a group, Urkraft released a handful of demos with roots in both old school and melodic Death Metal and with links to the more atmospheric side of Black Metal. No matter whether these demos were dominated by fast or slow parts, brutal or more emotionally charged parts, the key aim was always to have a dark feel and focused song writing.

In 2003 Urkraft released the four-track demo ?Primordial?, which established a sound that resembled a more modern and thrash-metal approach. This demo marked a bold departure from the realm of Danish lyrics, with each song being written in English and also affirmed Urkraft as talented musicians, reflected by the natural seating of keyboards within their sound. The success of the ?Primordial? demo led to the band signing with German label Cartel Media, before releasing their debut album ?Eternal Cosmic Slaughter? in March 2004. This album, recorded at the Antfarm studio in Denmark lulled Urkraft into a wide stint of touring. Urkraft supported fellow countrymen Withering Surface on their Danish tour, appeared at the North Atlantic Masters of the Universe Festival 2004 in Iceland and played a few gigs in hitherto unexplored parts of Germany.

All in all the word and the sound spread, and more metalheads joined the slaughter of the underground phenomena Urkraft. In May 2006 they released their second full-length album on Earache Records, entitled ?The Inhuman Aberration', once again recorded at the Antfarm studio, produced by sonic mastermind Tue Madsen. This album features their fastest and most brutal efforts thus far, penetrated by a dark and emotionally intense sense of self-expression.

URKRAFT is a Scandinavian/German expression and could be translated into primordial or primitive force.