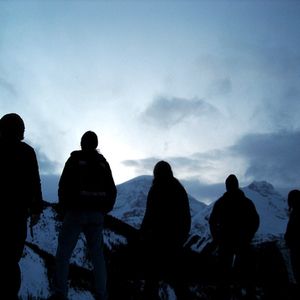 There are at least two bands called Dark Forest. In order of formation: 1. A British traditional heavy metal band. 2. A Canadian pagan black metal band. DARK FOREST (CAN) is an epic metal one-man project currently based in Calgary, Canada. A live lineup exists for live performances, however DARK FOREST is first and foremost a studio project. Created in late 2003 by David Parks, the vision of DARK FOREST remains to create an epic style of atmospheric metal fuelled by a connection with heritage, history and nature.

DARK FOREST (CAN) is an epic metal one-man project currently based in Calgary, Canada. A live lineup exists for live performances, however DARK FOREST is first and foremost a studio project.

Created in late 2003 by David Parks, the vision of DARK FOREST remains to create an epic style of atmospheric metal fuelled by a connection with heritage, history and nature.

Parks began the initial writing process in late 2003 with songs such as Among Silent Pine, Warwinds, and Under The Northern Fullmoon. The writing process continued from here until early 2005. A four track demo was arranged and released that summer and titled Demo 2005. It received many positive reviews, and was also hailed one of the most promising demos of that year by reviewers.

Demo 2005 broke out into the Canadian and international metal community in summer 2005 and gained much respect and support with sales reaching from Germany to Japan. Parks continued the writing process and laid the groundwork for the first full-length DARK FOREST album. Interest also grew in Europe during this time and media labeled early DARK FOREST releases as 'Vinlandic Pagan Black Metal'. With this said, there is no formal genre which Parks wishes to be bound to. March 2006 marked the completion of the writing process for the first full-length album Aurora Borealis. It was self-recorded by Parks in summer 2006 and released in September 2006.

Surpassing the amount of support of Demo 2005, Aurora Borealis broke through into the wider metal underground. Aurora Borealis received an overwhelming attention as a self-recorded and produced full-length. Amongst many other promotional shows for Aurora Borealis, DARK FOREST was invited to play the Heathen Crusade II festival in the United States shortly after the release. This early date in 2007 marked the first international appearance by the line-up.

In March 2007, Parks signed with Bleak Art Records to re-issue Aurora Borealis with a new mix and real drums, and also to release the next full-length album. Year 2007 brought more shows outside of the local area, including November appearances with acts such as Ensiferum and Enslaved in Toronto, Canada.

A slow time for the lineup ensued in 2008 and 2009, with minimal live appearances and a general regrouping and refocusing of the project by Parks. During this time, new songs were written for a second full-length album titled LAND OF THE EVENING STAR. These songs were completed in May-June 2010 and are scheduled to be released on a new album in Winter 2011. With such a gap between releases, the new album proves to be a step up from Aurora Borealis both musically and lyrically with a change in style and approach in creating epic metal of the highest quality!

DARK FOREST (GBR)
Formed in 2002 by Christian Horton and original bassist Dave Batham, Dark Forest set out to write and play Heavy Metal music. By 2004, after a year of small gigs, the band released a three song demo called Succubus. A few line up changes later and many more gigs under their belt they produced two self-recorded EPs, 'Fear Dearg' and 'Phantoms of the Sea'. In 2007 the band signed to Eyes Like Snow records who saw potential in the demo material. They released their debut album 'Dark Forest' in 2009. Recently recruited to the current line up is vocalist Will Lowry-Scott who took over vocal duties from Christian to result in the first five piece line up of the band. Now signed to Iron Kodex and stronger than ever, Dark Forest are prepared to lead British Heavy Metal back to its former glory. Combining the great legacy of classic NWOBHM-acts like Tyrant, Elixir, Maiden or Tredegar with the pounding glory of Epic Metal bands like Isen Torr] and the beautiful mythic harmonies of Anglo-Saxon folk music, Dark Forest deliver an absolutely unique brand of classic, no-bollocks Heavy Metal. Galloping rhythms, insanely beautiful twin guitar harmonies and unbelievable vocal lines - everything British Metal was famous and loved for in the early 80's is there. If there?s a band to lead English heavy metal back to former glory, it?s Dark Forest.

Land Of The Evening Star