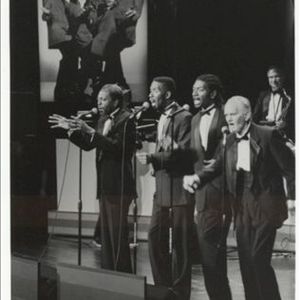 The original group had served together in the US Air Force. In 1955, they were stationed in at the Air Force installation at the Pittsburgh airport in nearby Corapolis. Singing together in their spare time brought a desire to hear for themselves what they sounded like. In October 1956, the group consisted of Norman Wright, lead tenor, Corinthian "Kripp" Johnson, first tenor, Don Jackson, second tenor, Clarence Quick, second bass; and Dave Larchey, baritone. During a rehearsal they recorded nine a capella songs in the basement of a local deejay and music entrepreneur, Barry Kaye.

Listening to the tape they all agreed the sound was close, the style was coming around and all that was needed was a little more work.
Three months later the group was in a downtown Pittsburgh's Sheraton Hotel in a makeshift studio set up by Fee-Bee records, a small local label owned by Joe Auerbach. They were backed by a pickup band of Air Force buddies. At the session they recorded "Baby, Let Me Know," "Come Go With Me," "True Love," "When I Come Home," "Don't Be a Fool," and "Watching the Moon." Their first release, "True Love" b\w "Baby, Let Me Know"came in the fall of 1956. "True Love" was a typical rhythm and blues ballad.
"True Love" began receiving local airplay in early December prompting Auerbach to re-release it with a stronger B-side. During the second week of January 1957, the re-titled "How Can I Find True" was released with "Come Go With Me" on the flip side. In almost no time deejays flipped the record and discovered "Come Go With Me." The popularity of "Come Go With Me" began to spread from Pittsburgh to Youngstown and then Cleveland.
With orders he couldn't fill Auerbach went looking for a distributor. Within three weeks a deal was made with Dot Records that allowed Auerbach to release small quantities on the Fee-Bee label locally with. the national sales for the Dell-Vikings being on the Dot label. Dot released "Come Go With Me" in the first week of February. Strong demand for the record saw it appear on the national charts within a week.

Come Go With Me: The Best Of The Del-Vikings