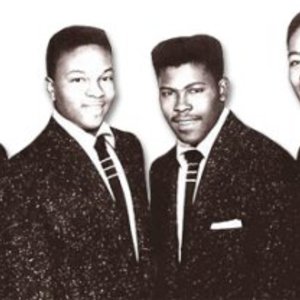 The Penguins were an American doo-wop group of the 1950s and early '60s, best remembered for their only Top 40 hit, "Earth Angel (Will You Be Mine)", which was one of the first rhythm and blues hits to cross over to the pop charts. The song peaked at #8 on the national charts, but had a three-week run at #1 on the R&B "race" chart. Singers Cleveland Duncan, Curtis Williams, Dexter Tisby, and Bruce Tate, all students at Fremont High in Los Angeles, CA, formed the quartet in 1954. They broke up in 1959. Cleve Duncan sang lead on "Earth Angel."

The Penguins were one of a number of doo-wop groups of the period named after birds (such as The Orioles, The Flamingos, and The Crows).

The Penguins' single "Hey Senorita" was released on Doo-Tone Records in 1955 as the intended A-side, but a radio DJ flipped the record over to the B-side, "Earth Angel", which became far more popular. Their midtempo performance was a cross between rhythm and blues and the new rock and roll played by white performers and enjoyed by teenagers.

Coming off the success of "Earth Angel," The Penguins approached Buck Ram to manage them. Ram's primary interest was managing The Platters, who at that point had no hit singles but were a profitable touring group. With The Penguins in hand, Ram was able to swing a 2-for-1 deal with Mercury Records in which the company agreed to take on The Platters as a precondition for getting The Penguins (the group that Mercury really wanted). Ironically, The Penguins would never have a second hit single under the Mercury deal, while The Platters would be the label's most successful act.

The Penguins never had another national hit, but their 1957 cover of "Pledge of Love" reached #15 on the R&B chart.

For three decades, "Earth Angel" was almost always the #2 song on oldies station WCBS-FM's annual Top 500 countdown. (Another doo-wop favorite, The Five Satins' "In the Still of the Night" was the perennial #1 pick.)