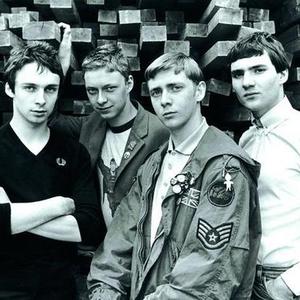 There were three groups called The Chords: 1. An American doo wop group, whose lone hit was "Sh-Boom", ranked #215 on Rolling Stone's list of the 500 Greatest Songs Of All Time. 2. A British mod-revival band consisting of Chris Pope, Martin Mason, Billy Hassett, and Brett Ascott. They have reformed and are have been playing gigs since 2010. 3. An acoustic duo from the Midwest that plays light folk and blues music, consisting of Cody Magee and Stephanie Thousand. ===

1. An American doo wop group, whose lone hit was "Sh-Boom", ranked #215 on Rolling Stone's list of the 500 Greatest Songs Of All Time.

2. A British mod-revival band consisting of Chris Pope, Martin Mason, Billy Hassett, and Brett Ascott. They have reformed and are have been playing gigs since 2010.

3. An acoustic duo from the Midwest that plays light folk and blues music, consisting of Cody Magee and Stephanie Thousand.

1. The Chords were a 1950s American doo wop group, whose lone hit was "Sh-Boom". They are sometimes mistakenly cited as the first R&B group of the 1950s to reach the pop charts. Although both versions of the song Sh-Boom (by The Chords and by The Crew-Cuts) were huge hits, it is the song Gee, released by The Crows in June 1953, that is properly credited with the honor of being the first Rock n' Roll hit by a rock and roll group.

The Chords - Carl (lead) and Claude Feaster (baritone), Jimmy Keyes (first tenor), Floyd "Buddy" McRae (second tenor) and Ricky Edwards (bass) - formed in 1951 in the Bronx, New York, but were not discovered until three years later, when they were spotted singing in a subway station, a performance that ultimately landed them a recording contract with Atlantic Records' Cat Records label.

Jerry Wexler, Atlantic's A&R man, had the Chords cover a Patti Page hit, "Cross Over the Bridge" (it was also covered by The Flamingos for the Chance Records label), but it was the B-side, "Sh-Boom," a vocal tune with an a cappella catchy introduction that caught the imagination. A cover version later done by a white group called The Crew-Cuts, attempted to add their own spin on the song by seemingly adding nonsensical syllables ("shh-boom, shh-boom, yadda da da yadda da da da da da") that caused considerably more commotion. However the words ("Yadda da da yadda da da da da da") were never sung in the original version by the Chords.

By the end of June 1954, "Sh-Boom" had climbed up the charts nationwide, charting on both the R&B (number three) and pop (number nine) lists, a nearly unprecedented feat for its time. For all practical purposes - along with The Crows' 1954 hit "Gee" (another upbeat B-side hit that DJs flipped over) - "Sh-Boom" introduced the white audience to black R&B music for the first time. [NOTE: The Crows "Gee" first appeared on the Billboard charts in March, 1954. While both versions of "Sh-Boom" were influential, better candidates for the first, or most influential song, by a black act to cross-over from the R&B charts to the pop charts, are The Dominoes' "Sixty Minute Man" which made it to #17 of the pop charts in 1951, and The Orioles' "Crying in the Chapel", #11 in 1953].

Not everyone thought the song was a precursor of good things to come. Peter Potter, host of TV's popular "Juke Box Jury", was seemingly aghast at the state of this then-new trend in pop music and attacked "Sh-Boom" asking if anyone would remember the admittedly demented ditty in five, let alone 20 years time and whether any record label would even think to re-release it in the future.

Atlantic released numerous additional singles which mostly failed to chart. A last gasp attempt to resurrect the act came in mid 1955 when the group renamed themselves the Sh-Booms after their one big hit. The Chords/Chordcats/Sh-Booms went through several personnel changes during the late 1950s, recording a handful of forgettable records for Vik Records in 1957, and eventually returned to Atlantic in 1960 for one last recording before slipping away into the ether of time.

The Chords story starts with cousins Billy Hassett and Martin Mason rehearsing Beatles and Who songs, etc, together at school. Via a New Musical Express advert Chris Pope joins in January 1978. They spend the year writing, rehearsing and playing a couple of gigs. They also fail to become the band in Quadrophenia - too loud apparently!.

With the dawn of 1979 Paul Halpin (the original drummer and eventual road manager) is replaced with Brett (Buddy) Ascott. Buddy adds the final element the band is looking for. A powerhouse drummer with far too much energy and a desire to be Keith Moon, Buddy is the final link in the chain.

By the end of March the band are playing the Wellington in Waterloo to packed crowds. In the audience are Paul Weller, NME and Polydor. This helps the band secure more gigs and an important support slot to The Jam. The band play with many bands including, The Purple Hearts, Secret Affair, The Scooters and Back to Zero.

From then it goes very quickly: Jimmy Pursey, he of Sham 69, signs the band for his new label - this end in tears with Pursey disrupting an Undertones gig (The Chords are the support band on the tour). Luckily or (unluckily?) Polydor take The Chords on. From here, as the band see it, it all starts to go wrong.

The first single 'Now it's Gone' is the second version the band has had to record. It's released in September and gets to 63 in the charts. The band is disappointed it doesn't get further, but for a debut it sells well. In the U.K. at the time the Mod Revival is in full swing with the release of the movie Quadrophenia and The Jam are making their mark on the charts. The band receives press and airplay by association with the Mod scene. It can be said that they were part of the revival, but sensing this is a bad move the band try to distance themselves from the scene. This would have been a wise move but the press weren't going to let them get away with it.

'Maybe Tomorrow' is recorded in December and released in the New Year. A brilliant 45, a pure blast from start to end. This song alone has more balls than any tune at the time and by the end you are knackered just listening to it. It gets them an appearance on 'Top of the Pops'. It is followed by 'Something's Missing' - another slap of energy. If these songs had been the sole output of the band it would have been great.

April see the release of 'So Far Away'. Highlights of the LP are 'Breaks My Heart', 'It's No Use' and the mighty title track 'So Far Away'. The LP charts at number 30. The past year has gone well for The Chords and for rest of the year they seem to be making headway. Two more singles are released, 'British Way of Life' and 'In My Street'. Several radio sessions are recorded and transmitted. The band seem to be on tour continually - highlights include Loch Lomond Festival, Scotland, with Bad Manners, Stiff Little Fingers, The Tourists and The Jam; and their first gigs abroad.

But by November Billy Hassett is no longer a Chord, ousted for reasons known only to the group. The band are looking for a new singer and a replacement is found in Kip - ex-Vibrators. New songs are recorded and it's make or break time for the band. The single 'One More Minute' is brilliant - imagine 'It's Gonna Happen' by the Undertones, but better. When it fails to achieve the success the band hope for, they are only one more single from the end. 'Turn Away Again' is released and nothing happens. So it's time to call it a day as they say.

The Garden Around The Mansion