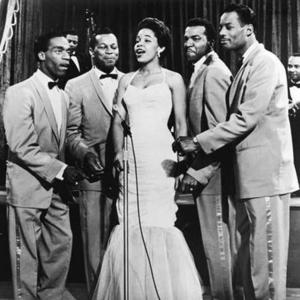 The Platters were a successful black vocal group of the early rock n roll era. Their distinctive sound was a bridge between the pre-rock n roll Tin Pan Alley tradition of the Ink Spots and the Mills Brothers and the explosion of teenage music in the mid 1950s. The most successful incarnation of the group comprised lead tenor Tony Williams, David Lynch, Paul Robi, Herb Reed, and Zola Taylor. The Platters formed in Los Angeles, CA, USA in 1953 and were initially managed by Ralph Bass.

The Platters formed in Los Angeles, CA, USA in 1953 and were initially managed by Ralph Bass. They had a contract with Federal Records but experienced little record success until they met music entrepreneur and songwriter Buck Ram. He added lead vocalist Tony Williams (who gave the Platters their distinctive sound) and female vocalist Zola Taylor. Under Ram's guidance, the Platters recorded seven singles for Federal in an R&B/gospel style, scoring minor regional hits on the West Coast. One song recorded at Federal, "Only You (And You Alone)", originally written by Ram for the Ink Spots was deemed unreleasable by the label.

Despite lack of chart success, the Platters were a profitable touring group--so successful that The Penguins, fresh from their No. 2 single Earth Angel, asked Ram to manage them too. With the Penguins as a bargaining chip, Ram persuaded Mercury Records into a 2-for-1 deal. In order to sign the Penguins, he insisted, the label also take the Platters. Ironically, the Penguins never had a hit for the label.

Convinced by Tony Williams that "Only You" had potential, Ram had the group re-record it during their first Mercury session. Released in the summer of 1955, it became the group's first Top Ten hit on the pop charts, and topped the R&B charts for seven weeks. It has since become one of the most played records in any genre and the song has been covered by innumerable artists. Ironically, the follow-up, The Great Pretender, with lyrics written by Ram in the washroom of the Flamingo Hotel in Las Vegas, exceeded the chart success of their d?but and became the Platters' first national No.1 hit. The Great Pretender was also the act's biggest R&B hit, with an 11-week run at the top of that chart. In 1956. The Platters appeared in the first major rock n roll movie, Rock Around the Clock, and performed both "Only You" and "The Great Pretender"[2] and they sang "You'll Never Never Know" in The Girl Can't Help It, produced the same year.

The Platters' unique vocal style touched a nerve in the music-buying public, and a string of hit singles followed, including two more Top 100 No. 1 hits, one Hot 100 No. 1 hit, and more modest hits such as "I'm Sorry" (No. 11) and "He's Mine" (No. 23) in 1957, "Enchanted" (No.12) in 1959, and "The Magic Touch" (No.4) in 1956. The Platters hit on a successful formula of updating older standards, such as "My Prayer", "Twilight Time", "Harbor Lights", "To Each His Own", "If I Didn't Care" and Jerome Kern's "Smoke Gets in Your Eyes". This latter release caused a small controversy after Kern's widow expressed concern that her late husband's composition would be turned into a "rock n roll record". It topped both American and British charts in a tasteful Platters-style arrangement.

The group was inducted into the Rock n Roll Hall of Fame in 1990 and into the Vocal Group Hall of Fame in its inaugural year of 1998. The Platters were the first rock n roll group to have a Top Ten album in America. They were also the only act to have three songs included on the American Graffiti soundtrack that sparked an oldies revival in the early to mid-1970s: "Smoke Gets in Your Eyes", "The Great Pretender" and "Only You (and You Alone)".

Many groups have toured bearing the name The Platters but only one member of the original line-up, Herb Reed, was still touring and performing with Herb Reed's Platters in 2008.

Zola Taylor died on April 30th 2007 of pneumonia whilst recovering from surgery.