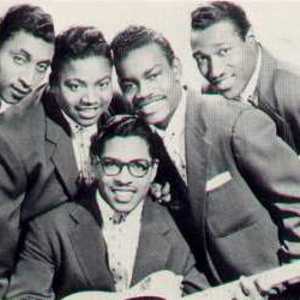 The Moonglows were an influential American R&B and doo-wop group based in Cleveland, Ohio. The original group was composed of Bobby Lester, Harvey Fuqua, Pete Graves and Prentiss Barnes, along with guitarist Billy Johnson. Originally known as The Crazy Sounds, they were renamed by Cleveland DJ Alan Freed, who was known on the air as Moondog, and who decided to heavily promote the group. Marvin Gaye joined the group in 1958, and they later disbanded in 1960.

In early 1951, the Moonglows, mostly featuring Fuqua on lead vocals, began recording, first for Freed's Champagne record label and then for Chicago's Chance Records, achieving local success in the midwest with a bluesy sound. By mid 1954, the group had become more polished (as evidenced by their Lester-led cover of Doris Day's "Secret Love"), and signed with the bigger Chess Records label. Their first Chess record was also their first R&B hit, the Fuqua-penned "Sincerely" (1954), with a lead vocal by Lester (and covered for the pop market by The McGuire Sisters). "Sincerely" was followed by a series of original R&B hits in 1955 and 1956, including "Most of All", "In My Diary" (later recorded by The Spinners), "When I'm With You" (all led by Lester) and the uptempo "See Saw" (featuring Fuqua). 1957 saw the release of the Fuqua led "Please Send Me Someone to Love" (originally by Percy Mayfield in 1950).

Through this period, the group perfected their patented, breathy, "blow harmony," which inspired countless 1950s doo-wop groups and 1960s soul groups, and even the 1970s The Chi-Lites.

Generally, Fuqua sang lead on the uptempo and blues-based tunes, while Lester was the group's romantic lead. Occasionally, on songs like "We Go Together" (1956), they sang a duet lead. Fuqua and Lester also "Moonlighted" on the Checker Records label as the "Moonlighters", recording a local hit "Shoo-be-doo (My Lovin' Baby)" in 1955. The group appeared in Rock Rock Rock a movie produced by, and starring Alan Freed. The last recording by the original five was the hit "10 Commandments of Love" (released in early 1958). It featured Fuqua on lead, with Billy Johnson doing the spoken recitation. By 1957, Fuqua had begun to re-assert himself as lead vocalist and manager, with Lester being pushed to the background. This created a great deal of friction within the group.[citation needed]

Also in 1957, a Washington, D.C. based group known as The Marquees was struggling to make it. The members were Marvin Gaye, Reese Palmer, Chester Simmons, and James Knowland. They decided to give an impromptu audition to Fuqua, as the Moonglows had come to town for a concert. Fuqua was so impressed with them that he decided to fire the entire group and take on the Marquees as the "New Moonglows." Fuqua recorded with these four (later including fifth member Chuck Barksdale), as Harvey & The Moonglows through 1960, when the group dispersed. Gaye went on to a huge solo career.

Fuqua produced the Spinners in the early 1960s, even singing on a few of their records (but not 1961's "That's What Girls are Made For", which featured Bobby Smith imitating Harvey's style). Fuqua became a staff writer and record producer for Motown Records through the 1960s, and later road-managed Smokey Robinson. Lester returned to his hometown of Louisville, Kentucky and opened a nightclub. Barnes moved to Mississippi and retired from professional singing after an automobile accident in 1969.

Yet another new Moonglows formed in 1970, featuring Lester and a Louisville group called the Aristocrats, who consisted of Lester's cousin Gary Rodgers, plus Albert Workman, Robert Ford, and Billy McPhatter (son of Clyde McPhatter). This group performed once in 1971 at a show in New York, but the Aristocrats decided to return to Louisville. Dallas, inspired by the reception his group received, reunited with Harvey Fuqua and Pete Graves, plus new members Doc Williams and Chuck Lewis, and the Moonglows were back.

They recorded an LP released on RCA Records in 1972, charting their last single, "Sincerely '72", a funky re-working of their 1954 hit.

This line-up split up after 1972, and Lester began singing with local Louisville singers again, including at times Rodgers, Ford, Robert Lee Davis, Bruce Martin, and Peter Lawford. This group recorded a mostly a cappella, live album Moonglows in 1979.

Lester died in his hometown of Louisville from cancer in 1980, and Billy McPhatter returned to the group, with Rodgers taking over most of the leads in what was now billed as "Bobby Lester's Moonglows." McPhatter was later replaced by Bobby Lester, Jr. Harvey reunited with the remainder of his 1972 Moonglows in 1983 for a Grammy performance (minus Lester, and Barksdale who had rejoined The Dells, and plus guitarist Johnson), and they toured until 1986 as Harvey & the Moonglows.

In 2000, Bobby Lester's Moonglows, consisting of Rodgers, Martin, Lawford, and Gene Kelly, appeared on the PBS special Doo Wop 50, backing up Harvey Fuqua on "Sincerely" and "10 Commandments of Love." Fuqua, now in his mid-70s, still sings occasionally, sometimes backed up by Lester's Moonglows, sometimes a 50s R&B group called the Magnificents, and sometimes by local "pick-up" groups. Fuqua also produces and manages gospel acts. Reese Palmer is a member of The Legendary Orioles, as well as leading a new version of The Marquees. Chuck Barksdale is still with the Dells. Billy Johnson died in Los Angeles in 1987, Gary Rodgers died in 2005, and Prentiss Barnes died in 2006.[1].
Harvey Fuqua passed away in 2010.

Most Of All CD2

Most Of All CD1

The Best Of The Moonglows