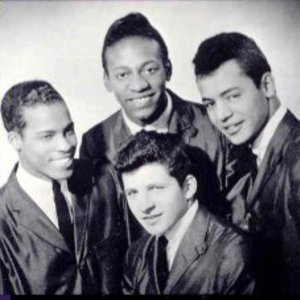 The Crests were a popular New York City R&B musical group of the late 1950s, often thought to be another all-black teenage-sound band, they were in fact about as integrated as a group could get, with four men (two of them black, one Puerto Rican and one Italian) and one black female. The band was founded by JT Carter and included Talmoudge Gough, Harold Torres, and Patricia Van Dross (older sister of the late Luther Vandross) JT found lead vocalist Johnny Mastrangelo (later just Johnny Maestro).

The group had several Top 40 hits including "16 Candles", "Step By Step" and "The Angels Listened In". Johnny Maestro later formed the Brooklyn Bridge in 1968 and had a Top 40 hit with "The Worst That Could Happen". JT Carter kept the band together and working steadily through the 1990's. The current version of the Crests contains no original members.

Their most popular song was "Sixteen Candles" which rose to number 2 on the Billboard charts in 1958.

It should be noted that Johnny Maestro went on to form the Brooklyn Bridge who had two number one hits including "The Worst That Could Happen" . His voice got better with age but unfortunately Mastroangelo passed away last year of throat cancer at the age of 65.

The Best Of The Crests (With Johnny Maestro)