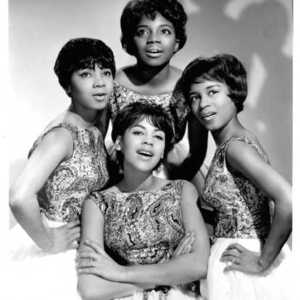 The Chantels were the first black female group to have nationwide success. The group was established in the early 1950's at St. Anthony of Padua school in the Bronx. The group consisted of Arlene Smith (lead), Sonia Goring, Rene Minus, Jackie Landry Jackson and Lois Harris. They got their name from a rival school, St. Frances de Chantal. They were discovered by Richard Barrett, lead singer of the Valentines and eventually signed to End Records.

They were discovered by Richard Barrett, lead singer of the Valentines and eventually signed to End Records. Their first single was "He's Gone" (Pop #71) in August 1957. In January 1958 they released their second single, "Maybe" (#15 Pop; #2 R&B). Several other singles were released on End, though none as successful as "Maybe."

The group was dropped by End in 1959, and Arlene Smith decided to go solo. Lois left to pursue a college education. In 1960, Annette Smith (no relation) replaced Arlene and the group went to Carlton Records, where they had their second huge hit with "Look in My Eyes" (#14 pop, #6 R&B). Several other singles followed and the group switched labels several times. Personnel changed throughout the 60's, with their final single released in 1970.

Arlene fronted a new group of Chantels in the 1970s for oldies shows and continues to perform. The remaining original Chantels reformed as well and hired Noemi (Ami) Ortiz as their new lead singer. Jackie Landry died in 1997.

The Chantels were inducted into The Vocal Group Hall of Fame in 2002.

We Are The Chantells/There's Our Song Again

The Best Of The Chantels