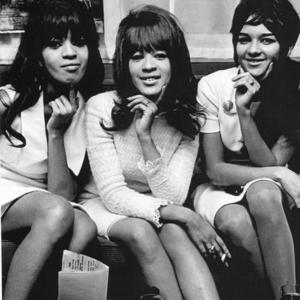 The Ronettes were a girl group of the 1960s from New York City, best known for their work with producer Phil Spector. They consisted of lead singer VERONICA Bennett (a.k.a. Ronnie Spector), her sister Estelle Bennett, and their cousin Nedra Talley. Their defining album is "Presenting the Fabulous Ronettes Featuring Veronica" from 1963, and their most famous songs include "Be My Baby", "Baby, I Love You", "(The Best Part Of) Breakin' Up", and "Walking In The Rain". The group's career:

The group's career:
Sisters Estelle (born 1941) and Veronica Bennett (born 1943), and their cousin Nedra Talley (born 1946), began singing together as teenagers in Washington Heights, Manhattan. Encouraged by their grandmother, they entered and won a talent show at the Apollo Theatre in 1959, as The Darling Sisters. Phillip Halikus saw their potential, became their manager, and promoted their early appearances at hops and charity shows.

In 1961, while standing in line at the Peppermint Lounge, they were mistaken for a singing trio that had not arrived and were ushered on stage. After performing Ray Charles' "What'd I Say", they were signed to appear regularly there and in Miami. Later that year, they danced in shows staged by disc jockey Murray the K, but, contrary to many sources, did not appear in the 1961 film Twist Around the Clock. They did get a record deal with the Colpix label, and, as Ronnie & The Relatives, released their first single "I Want a Boy". They also worked as backing singers for Bobby Rydell, Del Shannon, and Joey Dee & The Starliters. Renamed as The Ronettes, they issued several more singles with Colpix and recorded an album, unissued at the time, but had little early commercial success.

In 1963 they came to the attention of producer Phil Spector, who was looking for a new girl group to assume The Crystals' mantle. He was taken with Ronnie's voice and style, and signed The Ronettes to his Philles label. As Spector's new prot?g?es, they were given a strong image as "bad girls", with beehive hairdos, heavy eyeliner, and tight skirts. Their first Philles single was "Be My Baby", co-written by Spector with Jeff Barry and Ellie Greenwich, and arranged and produced by Spector. It became a worldwide hit, reaching # 2 on the U.S. pop chart, # 4 on the R&B chart, and # 4 on the UK chart. The follow-up, "Baby, I Love You", had an even denser arrangement, featuring Leon Russell on piano, and backing vocals from Darlene Love and Cher, among others. It was slightly less successful, reaching # 24 in the United States and # 11 in the United Kingdom. The Ronettes also featured on Spector's album "A Christmas Gift for You".

Early in 1964 The Ronettes toured England with The Rolling Stones and met The Beatles. They continued to have hits with "(The Best Part Of) Breakin' Up" (# 39 U.S., # 43 UK), "Do I Love You?" (# 34 U.S., # 35 UK), and "Walking in the Rain" (# 24 U.S.), which won a Grammy for Best Sound Effects, the only one Spector ever received. However, their LP, "Presenting the Fabulous Ronettes featuring Veronica", only reached # 96 and other singles were less successful; musical tastes had moved beyond the girl group sound, and the Ronettes were unable to maintain their relevance. After criss-crossing the United States and Canada as one of the opening acts for the final concert tour of The Beatles, they disbanded at the end of 1966.


Later events:
Estelle Bennett and Nedra Talley each married and, in 1968, Ronnie Bennett married Phil Spector and retired from performance for several years. In 1971, under Spector's direction, Ronnie recorded "Try Some, Buy Some" for the Beatles' Apple label. This was her last charting record, reaching # 77 in the spring of 1971.

In 1973, as she and Spector were about to divorce, she returned to performing at Richard Nader's "Rock and Roll Revival" show at Madison Square Garden. Her new version of The Ronettes at that time included Denise Edwards and Chip Fields, and they issued two singles on the Buddah label.

In 1988, the original Ronettes sued Spector for nonpayment of royalties. In 2001, a New York court announced a verdict in favor of the Ronettes, ordering Spector to pay nearly three million dollars in back royalties; however, the judgment was later overturned on appeal. On February 11, 2009 Estelle Bennett was found dead at her home in Englewood, New Jersey. She was 67.

Awards and recognition:
The Ronettes were inducted into the Vocal Group Hall of Fame in 2004.

It was believed that Phil Spector, in his capacity as a member of the Board of Governors, deliberately prevented the Ronettes (and Darlene Love) from being nominated for induction into the Rock and Roll Hall of Fame, although they had been eligible for a considerable period. The alleged reasons included the acrimonious divorce of Ronnie and Spector, in addition to the group having (unsuccessfully) sued Spector for back royalties. While Spector was awaiting trial on a murder charge and out on $1 million bail, the Ronettes were finally inducted into the Rock and Roll Hall of Fame at the March 12, 2007, induction ceremony held at the Waldorf-Astoria Hotel in New York City. Keith Richards, a self-confessed longtime fan, inducted the trio. Ronnie Bennett (Spector) and Nedra Talley performed "Baby, I Love You," "Walking In the Rain" and "Be My Baby." Estelle Bennett was present to accept her award but did not perform.

Be My Baby: The Very Best Of The Ronettes