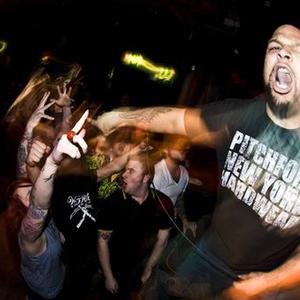 Wisdom In Chains was started a few years back with members from America and Europe. Maarten, a guitar player from Holland in a band called Daredevil made the call to Richie and Mad Joe who where in Krutch at the time. Maarten had the idea to start an old school band, with heavy punk and oi influences. The three met while Krutch was on tour in Europe. The plans where made and Maarten came to the USA to record. The group released a self entitled CD on Gangstyle Records. Only one show was ever performed by the group due to the extreme distance between the members.

Eventually Maarten, who was a key writer in the band, would convince Richie and Joe to find local members and keep this band going. So they recruited local guitar star and just crazy motherfucker in general Tony Meltdown. Tony was in a band called The Ninth Plague and basically shreds on the guitar. Shannon Sparky was brought in on drums, he was a logical choice. Shannon also played with Richie and Mad Joe in another band called Out To Win (aka Mushmouth). The search was on for the bass player, and the only guy that could jam with these cats was Big Show Greg, a local trouble maker and drunk. The new line-up was complete and now the band is hitting the highways and playing killer street rock with heavy old school HC and OI influence. The members of this band have played and toured with other bands like Krutch, FCK, The Ninth Plague, Boxcutter (another side project of Mad Joe Black), Out To Win, Feeble and others, they are no new jack fuckos. They paid their dues and they do this music shit well. There is a full length CD out on Gangstyle Records, and now the fucking stellar release "DIE YOUNG" is out on Spook City Records. Take a listen and enjoy.

In mid November of 2006, Wisdom in Chains signed to Eulogy Recordings. They finished their album in a relatively short amount of time, being released to Record Stores across the United States on June 19, 2007. The new album is titled "Class War" and has 16 tracks, plus one bonus track. The album is very down-to-Earth, with songs about the working class, life coming from poverty, and pride in being from Pennsylvania. Some other issues that Mad Joe battles are those of racism, unfairness, and de


In 2009, Wisdom In Chains signed to I Scream Records.
https://www.facebook.com/WisdomInChainsPAHC

Nothing In Nature Respects Weakness