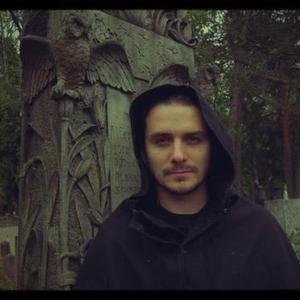 Hexvessel is a psychedelic folk-rock band that was founded by Englishman Mat "Kvohst" McNerney, vocalist for blackmetal bands D&oslash;dheimsgard and Code. He moved to Finland in 2009 and was joined by a coven of musicians from Tampere that feature members of Galacticka and Dark Buddha Rising. Fusing late 1960s and early 1970s English folk and psychedelia with a love for Finnish nature, pagan mysticism, folklore and the occult, they play a witches brew of acoustic balladry and heavy tripped-out atmospherics. Interior-world-music for secret ceremonies and forest rituals.

On the debut record, Kvohst collaborated with Norwegian dark tango/folk musicians from Krugers Medbragte and Jaime Gomez Arellano from experimental avant-prog bands such as Mothlite, Guapo & who has previously carried out production work on Miasma And The Carousel of Headless Horses and Ulver. The album also features a guest vocal performance by Carl-Michael Eide aka Czral from progressive rock weirdos Virus and original hand-drawn artwork by Finland's godfather of doom, Albert Witchfinder.
Dawnbearer is a personal and intensely dark trip of unusual compositions, using organically recorded instruments such as dulcimer, psaltery, harmonium, zither, gongs, harp, mellotron, mandolin and bandoneon. Otherworldly folk, with an uncanny, haunting resonance that will undoubtably surprise fans of McNerney's past work. For admirers of Changes, Woven Hand, Espers & Comus. Dawnbearer was released by the audio aficionados at Svart Records on CD & LP on the 5th of February 2011.

The band is based between Helsinki and Tampere, Finland.

When We Are Death