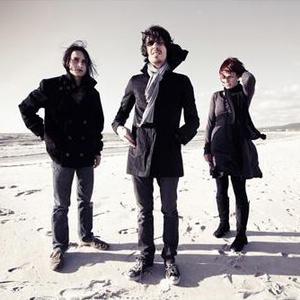 Verdena are an alternative rock band from Albino, Bergamo, Italy. The band members are Alberto Ferrari (voice, guitar), Roberta Sammarelli (bass) and Luca Ferrari (drums). The three have been playing together since 1992. Verdena rehearse every day (when they're not on tour) in their garage, where they have built a 24-track recording studio called the Henhouse. The hen-house is their sound laboratory--full many different instruments, like guitars, amplifiers, rhodes, mellotrons, and Korg synths. No digital stuff is allowed to get in!

Verdena rehearse every day (when they're not on tour) in their garage, where they have built a 24-track recording studio called the Henhouse. The hen-house is their sound laboratory--full many different instruments, like guitars, amplifiers, rhodes, mellotrons, and Korg synths. No digital stuff is allowed to get in!

They view the song like a painter would a picture: to work on by carefully adding more and more layers, yet keeping the big picture in mind. The result is much more than a simple song.

Verdena's songs, which are stellar in and of themselves, have a new added value since the lyrics are written uniquely. They are not penned in a narrative, logical way. Rather, they follow a stream-of-unconscious style that is closer to the Anglo-American rock language than to the syncope traditions of the Italian language, which are so far from the aesthetics of pure rock. Alberto's lyrics have always been one of the main characteristics of Verdena that stand out from the usual and reiterated formula of the Italian rock music.

EPs:
Two EPs were published after the album release: Valvonauta and Viba ep.

On tour:
The band played in the most important festivals (Imola Heineken Music Festival with Hole and Marylin Manson, Independent Day Festival with Deftones, Limp Bizkit, Arezzo Wave Love Festival with Henry Rollins). Between September 1999 and the summer of 2000 Verdena played more than 100 gigs.
July 2001; Verdena play in Turin before U2 exclusive show in Italy.


Second Album:
Solo un grande sasso
Released in September of 2001
The first single, Spaceman, went immediately in the top ten. Same as for the album (sixth in the top ten for three weeks and on the top forty for other four weeks). The record sold 35.000 copies.

Other EPs:
After the release of the second album Verdena published two more EPs in which they made cover of Thirteen Floor Elevator's Reverberation and Melvins Creepy smell.

Third Album:
Il suicidio dei Samurai
Came out on January 31, 2004, two weeks before they played in Groningen, at Eurosonic. At the same time Verdena released the EP Luna. Suddenly it got number two for two weeks on the top ten. Then the album came out and it got to the seventh in the top ten. Made a club tour (30 gigs) most of the times got sold out. On summer 2004 they've made 40 gigs all over Italy. Then, once again, a club tour of 20 gigs. Once again sold out everywhere.