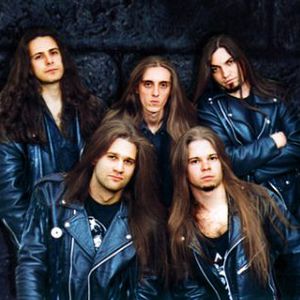 There are at least 3 artists called Wisdom, a Hungarian power metal band and an African funk band,and The Other IsParaguay Black Metal 1. Wisdom is a Hungarian power metal band formed in 2001. After their first demo in 2002 they had the opportunity to perform at Summer Rocks festival among metal artists like U.D.O., Saxon, Doro and Dionysus. They released their debut EP entitled Wisdom in 2004. In 2006 Wisdom performed as an opening act for Helloween in Budapest. Their first full-length album (Words of Wisdom) was released by Hammer Records in late 2006.

1. Wisdom is a Hungarian power metal band formed in 2001. After their first demo in 2002 they had the opportunity to perform at Summer Rocks festival among metal artists like U.D.O., Saxon, Doro and Dionysus. They released their debut EP entitled Wisdom in 2004. In 2006 Wisdom performed as an opening act for Helloween in Budapest. Their first full-length album (Words of Wisdom) was released by Hammer Records in late 2006.

2. Wisdom is also an afrobeat/funk band about whom almost nothing seems to be known, other than the fact that they released a classic funk single called Nefertiti in the 70s

3. During the second half of 1993, Seldrack LK and Berhkaial gave birth to this beast that went through many changes of name. Daemon would join the band on October of that same year, and WISDOM was chosen as the official name. The first demo was recorded in may 1995 ?The South, The Sun, The Sign?? A rehearsal demo was recorded October 1995 ?29 A.S?.

This release only was distributed to zines, labels and friends. On this booklet only Berhkaial and Daemon appeared in the band pic, though Seldrack LK recorded all percussions. This was because he decided to take some time out. On December of the same year the beast made its live debut and after that, lay to rest for a year. Seldrack returns to the band October 1996, but under a new pseudonym, Rex Raven III. In April 1997 a new rehearsal demo was recorded ?Primum Mobile? (Promo ?97)

With this promo, the label Southern Hellish Productions (Argentina) contacted the band and agreed to record an album that would originally be named ?Empire of Hadith?. The band entered L.A. Studios for the recording of 12 songs but, ...recording of 12 songs but, due to some problems, this album was never released., this album was never released. Therefore the band splits up.

Late 1998 Seldrack and Berhkaial decide to continue with the band. They invited D.A. to join the band. With this line-up Wisdom recorded 3 songs that would become part of a 4-way split ?Purgatory Unchained ? Paraguayan Compilation Tape?, released by Covenant Records (Paraguay) in 1999 ?Purgatory Unchained? At that time the band started to explore more experimental sounds, leaving behind the fast and aggressive music, the trademark of the beast. The lyrics talked about spirituality and the dark side of the human mind.

After this release D.A. left the band and Joz. Perversus took his place. With this line-up Wisdom released their independent debut album ?Chrysalis Of Sphere?.

This record differed completely from anything that was recorded before. With a new logo, image and musical approach, Wisdom ventured to experiment with electronic and Gothic elements due to Berhkaial's (E.R.) musical and lyrical influences.

After the recording of ?Chrysalis??, Berhkaial (E.R.) left the band and Seldrack LK and Joz Perversus continued to perform in several live shows in Paraguay and Brazil. After a few months, Seldrack LK decided to change the band's name to Angelcoma due to the different musical approach they chose to follow. Soon afterwards the band splits up and each member continued to play in other projects.

In October '04 Seldrack LK asked Berhkaial to return for a live show after 5 years of silence. Pomber RG was invited to take over the bass. During this reunion a new rehearsal was recorded (Virus 2004) and released through Seldrack LK's little label Babylon Records. After this performance Berhkaial left the band. ?Virus?. 2004, Also a compilation tape was also released: ?Reverence to the Southern Throne. About the middle of 2007 the label Southern Darkness Productions (Colombia) released the album recorded in 1997 ?Empire? in professional tape format . After this Seldrack LK resurrected the beast calling Pomber RG and KH-aos, leaving the line-up of ?The Unholy Trinity? as follows:

Rise Of The Wise

The Paradox of The Truth