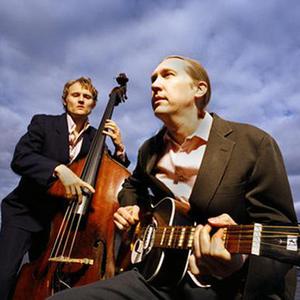 Brothers Oliver and Chris Wood -- the Wood Brothers -- grew up in Boulder, CO, and both left the area after graduating from high school, Oliver moving to Atlanta while Chris ended up in New York. Oliver, a guitarist, discovered he had a knack for writing songs and formed the blues-based King Johnson, which continues to do frequent gigs on the Southern circuit. Chris, a bassist, began playing jazz and rock in New York, eventually teaming up with John Medeski and Billy Martin to form the successful jazz-funk trio Medeski, Martin & Wood.

The brothers began jamming together at family functions, and the duo's roots-inflected blend of blues, folk, and rock quickly took shape. They privately released the Live at Tonic EP, which was drawn from their first-ever public concert at New York's Tonic venue on March 5, 2005. Signed to Blue Note Records, the Wood Brothers released their debut album, Ways Not to Lose, in 2006. The album, which features drummer Kenny Wollesen on five tracks, was produced by John Medeski and recorded at Allarie Studios in Shokan, NY.

Kingdom In My Mind

Live At The Filmore

Live At The Barn

Up Above My Head (EP)