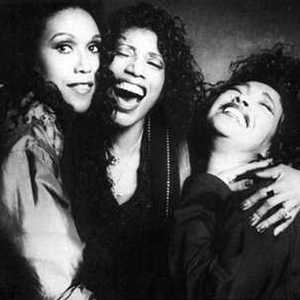 The Pointer Sisters is an american vocal group originally of four sisters out of the West Oakland Church of God where their father was a preacher. Under management & production of David Rubinson & later Richard Perry, the sisters became a hugely successful act throughout the 70s & 80s, creating a decades long career. Amongst the many hit tracks included "Jump (For My Love)", "He's So Shy", "Happiness", "Fairytale" and "Neutron Dance".

They had many record labels starting with their first failed single on Atlantic on through to long periods with Blue Thumb, Planet, rca, and later Motown and even SBK.


Bonnie Pointer and June Pointer first formed a secular singing duo in the late 60's and began performing in clubs around the San Francisco Bay area; Anita Pointer and Ruth Pointer later joined them. The Pointer Sisters hooked up with David Rubinson who was a record producer affiliated with Bill Graham. They would perform onstage with the flamboyant Sylvester of The Cockettes, and they'd done some work as background singers on recordings by Elvin Bishop, Boz Scaggs, Cold Blood and other San Francisco Bay Area groups.

Their big breakthrough was a cover of an Allen Toussaint composition originally recorded in 1970 by Lee Dorsey, the song was "Yes We Can Can" released by The Pointer Sister's in March 1973. The girls voices were added over funky backing tracks laid down with the help of Rubinson's contacts like Tower Of Power guitarist Willie Fulton. They sang live around a single mic, with Anita handling lead, and upon release the record soon hit Number 11 on Billboard's pop chart and Number 12 on the R&B chart. In 1974 the group surprised white audiences when they broke the color barrier in at The Grand Ol' Opry when performing their Country grammy award winning country song "Fairytale" in Nashville. "How Long (Betcha Got A Chick On The Side)" was a 1975 #1 R&B hit from their Steppin LP, with classic funky keys of Herbie Hancock on clavinet & wicked guitar stylings of Wah Wah Watson...

Bonnie Pointer left the group in 1977 for a solo career, and in 1978, the remaining sisters switched labels to Planet & production duties went to Richard Perry who modernized their sound away from a nostalgia based act into a more contemporary look & sound for the 1980's.

They produced the album Energy, with a classic country flavored updates of Sly Stone's "Everybody Is A Star", and a rendition of another Allen Toussaint song called "Happiness". The Perry streak included 1984's Break Out, which did exactly that going triple platinum and winning two Grammys for the singles Automatic and "Jump (for My Love)". This period in the early 80's ostensibly represents the group's commercial peak as a charting act. Their last big hit was Neutron Dance from the Beverly Hills Cop soundtrack.

As the 80's wound down, June Pointer recorded two solo albums, and later left the trio by 2001. Anita and Ruth still perform concerts under the group's name. Ruth's daughter, Issa Pointer, is the trio's newest member. June died after a long period of substance abuse on 12 April 2006.