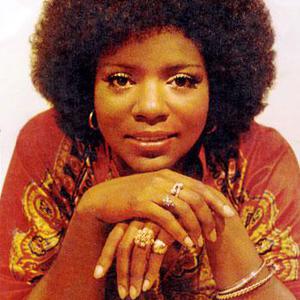 Early career
Gaynor was a singer with the Soul Satisfiers, a jazz/pop band, in the 1960s. Her first solo single was "She'll Be Sorry/Let Me Go Baby" (1965).

Her first real success came in 1975 with the release of her album Never Can Say Goodbye, which established her as a disco artist. The first side of this album consisted of three disco songs ("Honey Bee", "Never Can Say Goodbye" and "Reach Out, I'll Be There"), with no breaks in between the songs. This 19-minute dance marathon proved to be enormously popular, especially at dance clubs. All three songs were released as singles via radio edits, and all of them became hits. This album was so instrumental in introducing disco music to the public, that many later believed that Gloria Gaynor had been the first artist to record disco music. "Never Can Say Goodbye" became the first song to top Billboard magazine's dance chart. So, in that sense, she was the first. Capitalizing on the success of her first album, Gloria Gaynor quickly released her second album Experience Gloria Gaynor later that same year. While this album was also successful, it was not quite as popular as her previous album in the mainstream.

Some of her lesser-known singles - due to lack of recurrent airplay including, "Honey Bee" (1974), "Casanova Brown" (1975), and "Let's Make A Deal" (1976) - became hits in the clubs and reached the Top 5 on Billboard's disco charts. After her 1976 album, I've Got You, Gaynor shifted from her hit production team, to work with other productions. While it seemed like a good move, her subsequent producers did not seem to match Gaynor's vocal approach and style as well. This caused her the albums that followed such as 1977's Glorious and 1978's Park Avenue Sound to be regarded as merely good albums instead of excellent albums.


Major mainstream breakthrough
For the next few years, Gloria Gaynor would only enjoy a few moderate hits. However, in late 1978, with the release of her album Love Tracks, she climbed the pop charts again because of her song "I Will Survive". The lyrics of this song are written from the point of view of a woman, recently dumped, telling her former lover that she can cope without him and does not want anything more to do with him. The song has become something of an anthem of female emancipation, and is still a staple of office parties and karaoke nights. The song was awarded the first and only Grammy Award for Best Disco Recording in 1980 (the category was discontinued upon disco's fall from favor shortly afterward). In 1999, Pixar animator Victor Navoneused this song to create an alien music video which for a time was a minor Internet phenomenon.

Interestingly, "I Will Survive" was originally the B-side when Polydor Records released it in late 1978. The A-side, a song called "Substitute", then a recent worldwide hit for South African girl-group Clout, was considered to be more "radio friendly." Radio DJs flipped the record over, and audience response forced the record company to flip the songs, so that subsequent copies of the single listed the more popular song on the A-side. In late 1979, she released the album I Have A Right which contained her next disco hit, "Let Me Know (I Have The Right)", which featured Doc Severinsen of The Tonight Show fame, on trumpet solo.

Even though she exprienced difficulty having hit records in the U.S. after "I Am What I Am", the majority of her subsequent single chart on the UK Singles Chart. During the late 1990s and the 2000s, Gaynor returned to the American charts. She issued to albums "I Wish You Love" (2002) and "The Answer" (2006) that performed well with her fanbase. She recently celebrated the 30th Anniversary of her signature hit song. She is currently on tour.