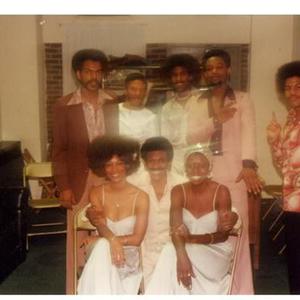 1)Ramp (1977-U.S.) A group that was based in Cincinnati and also an acronym for "Roy Ayers Music Productions," Ramp released one album in 1977 that didn't do all that much upon its release. However, decades later, as appreciation for anything bearing the mark of jazz-funk legend Roy Ayers has increased, the album has become a revered rare groove classic. Supported by the excellent "Daylight" and a version of Ayers' "Everybody Loves the Sunshine," two anti-gravity soul/jazz-funk pearls, the rare album has been known to fetch extremely high prices among collectors.

A group that was based in Cincinnati and also an acronym for "Roy Ayers Music Productions," Ramp released one album in 1977 that didn't do all that much upon its release. However, decades later, as appreciation for anything bearing the mark of jazz-funk legend Roy Ayers has increased, the album has become a revered rare groove classic. Supported by the excellent "Daylight" and a version of Ayers' "Everybody Loves the Sunshine," two anti-gravity soul/jazz-funk pearls, the rare album has been known to fetch extremely high prices among collectors. (It was reissued on CD in Japan in early 2007.) The group ? bassist Nate White, drummer John Manuel, guitarist Landy Shores, and vocalists Sibel Thrasher and Sharon Matthews ? folded after the album's release.

This new adventure would gain shape when Ricardo invited Rui, an old school friend, to take on the role of vocalist. From that moment on, hours and hours were spent in a friend's garage rehearsing and composing. Their effort would soon pay off, when they went on stage of Rock Rendez-Vous, a mythical venue in Lisboa, putting on a Show that captured the media and critics' attention due to RAMP's mind blowing music and passionate performance. By that time, Sapo, their previous bass player, had already joined the band, which had adopted a more exigent posture than ever.
Motivated by the excellent reviews of their live shows and a constantly growing public demand, RAMP focused their efforts for what would be their first recording - a demo tape that would be used to pursue a record deal.

In 1992 RAMP's first record ?Thoughts? (a Mini LP with six songs) hit the market through the Multi-National Polygram and three video-clips arose from the album: ?Try Again', ?Last Child' and ?Thoughts'.
Unanimously acclaimed by the Press as the truly break-through act of the past few years in Portugal, this record definitely marked the beginning of a new era in the Portuguese modern music world. Soon after the release, they recorded three more new songs to allow the release of ?Thoughts? in CD format.
However, for RAMP the live shows were always their favorite place, where they could truly express themselves and connect with the audience. Their reputation as excellent musicians and intense performers lead them to be invited to play as the opening act of ?Sepultura? in the ?Pavilh?o Dram?tico de Cascais?. The outcomes of that particular show exceed all expectations and forever changed the view of having Portuguese bands as opening acts of International artists.

In 1995 the Independent Label ?UL IV? released RAMP's second album ?Intersection?, revealing their maturity through a powerful and balanced production. As a result, the record stormed the Portuguese Sales Charts - something that never happened before to a Portuguese Metal Band - and got extensive video play with ?All men taste hell?, their first single and video. But RAMP also harvested, throughout the world, excellent reviews and media coverage such as in ?Burn? and ?Madball? in Japan, ?Metal Head? and ?Rock Brigade? in Brazil or ?Mindview? and ?Hard Force? in Belgium, just to name a few.

?EDR? was recorded in Nottingham, England, in the Square Studios and was produced by Simon Efemey. It was released in late 1998, showing a much solid RAMP with an astonishing ability to create great songs. ?Hallelujah? and ?Old times? were the chosen video-clips and ?For a While? became a radio hit, featuring in the Top Ten of Radio Comercial, one of the biggest Portuguese National Broadcasting Radios.
?Revolution on Tour? was also a success, reaching its highest point with the recording of a live album, the first of its kind for a Portuguese Metal Band.

The release of the double album ?Ramp...Live? in late 1999, captured the band's essence, portraying them as a collective that feels at home playing live, face to face with the audience.
The album gathers 18 tracks of their three original albums and it was recorded on their 10th Year Celebration Show, from which they took footage that would be later used for the new ?How? video-clip.
Songs like ?Dawn?, ?Hallelujah?, ?How? (EDR); ?Black Tie?, ?All Men Taste Hell?, ?Through? (Intersection); ?Behind the Wall?, ?Out of this World? (Thoughts), are moments of creative madness that reach a whole new dimension live. It also includes a brutal cover version of the Bangles' very own ?Walk Like an Egyptian?. ?Ramp?Live? is a historical document that travels throughout the career of the best and most successful Metal Band of Portugal.

In 2001 appeared in the compilation/tribute to Tarantula "20 anos de Tarantula" with the cover of "Light beyond the dark" (A compilation of portuguese bands playing Tarantula?s songs for their 20th carrer anniversary)

RAMP's fifth CD ?Nude? is a part of a lifetime filled with experiences, a challenge in which one finds a band stripped of prejudice and frontiers, unveiling their inner selves, and taking full responsibility for all production aspects.
With Licensement by Paranoid Record and distribution by Universal, tracks like ?Alone' (the first single and video-clip), ?Clear' or ?Around' manifest a more refined sonority, leaning on bold and subtle arrangements. And also a due note to the outstanding graphic design that wraps the package.

In 2005 RAMP release this EP where we can find a cover version of Duran Duran's ?Planet Earth' alongside another cover version, this time ?Anjinho da Guarda? (?Little guardian angel?), from acclaimed Portuguese artist Ant?nio Varia??es, that was made specifically for a Cartoon Series on SIC Radical - where its video-clip gets considerable airplay. There is also a new song ?You make me?. Yet again, the band takes charge of production and include in the CD a multimedia section packed with different surprises. The EP was set for sale exclusively on the Tour and via website, reaching nearly break of stock.

Ramp is a collective of German musicians, making music in the vein of the Berlin school of electronic music. Frank Makowski and Steve Parsick are joined by Lambert Ringlage and Martina Fantar in various studio and concert sessions.

Using a wide range of synthesizers, samplers and sequencers, Ramp adds an original and fresh touch to the history of German electronic music, with a deep and dark ambient sound, similar to Tangerine Dream and Radio Masacre International.