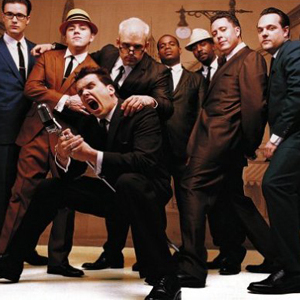 Formed in 1985, The Mighty Mighty Bosstones started playing in Boston clubs in the mid-1980s. After a brief period of inactivity due to the schooling commitments of its members, they reformed and released their album Devil's Night Out on Taang! Records. The Bosstones toured relentlessly throughout the 1990s, playing hundreds of shows a year, releasing albums and spinning off the popular rock radio hit "Someday I Suppose". They were eventually signed to Mercury Records. The band appeared in the movie Clueless. In 1997, the success of their single "The Impression That I Get" and its follow up, "The Rascal King" earned them mainstream recognition. In 2000 they put out their critically acclaimed disk Pay Attention. The Mighty Mighty Bosstones released their last album on Side One Dummy Records. They officially went on hiatus in 2003, citing too much time on the road and desire to branch out and do different things. In 2007, the Bosstones announced that they were reforming. They played their 10th Hometown Throwdown in Boston and released a new album, Medium Rare, which consists of rare B-sides, and 3 new songs, including the single, "Don't Worry Desmond Dekker".

When God Was Great

While We're At It

What The World Needs Now (CDS)

The Magic Of Youth

The Best Of (20Th Century Masters The Millennium Collection)