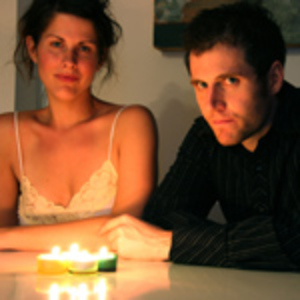 The Mendoza Line formed in Athens, Georgia in 1996 when Timothy Bracy, Peter Hoffman, and Paul Deppler, sharing a common love of such classic songwriters as Dylan, Costello, and Richard Thompson, sought to distill these influences into a sound falling somewhere between those of the two greatest pop bands of their formative years?American Music Club and the Replacements. After embracing and repelling various other members, Tim, Pete, and Paul were joined in 1998 by Shannon Mary McArdle...

Before McArdle became a permanent member, the Mendoza Line released two albums and one EP on the Kindercore label (Poems To A Pawnshop, Like Someone in Love, and I Like You When You're Not Around). Then, with Shannon in tow, the band left the nurturing surroundings of Athens for the mean streets of Brooklyn. A third full-length album, We're All In This Alone, appeared in 2000 on Bar/None Records. It marked Shannon's debut as a songwriter and the emergence of the musical checks and balances that shape the work of the current Mendoza Line: Pete's smart melodies and choruses on top of sharp arrangements, Tim's confounding literacy and engaging creakiness, and Shannon's emotional bareness and wispy, insinuating harmonies.

In 2002, the Mendoza Line released Lost in Revelry on Misra Records in the US and Cooking Vinyl Records in the UK. The album landed on best-of lists from Uncut to Magnet at the end of the year, and the Village Voice summed it all up very well when it called Revelry ?a small classic of no cultural import whatsoever?merely the most likable record of the year, a toothpick Blonde On Blonde held together with chewing gum.? Timothy, Paul, Peter, and Shannon recruited drummer Sean Fogarty and lead/pedal steel guitarist John Troutman, and with the inflating encouragement of the American and British press they inched toward professionalism like never before. Bar/None Records released a set of old recordings under the title If They Knew This Was the End in early 2003.

The Mendoza Line's fifth full-length album, Fortune, was released in the US and UK in 2004. MOJO called it the band's ?most confident sounding release,? and venerable writer and critic Greil Marcus (a long-time champion of the band) named it his favorite album of the year. At the end of 2005, the band released Full of Light and Full of Fire, a summation of the themes of avarice, lust, love, and corruption which have long consumed them. Entertainment Weekly called the new tracks ?the prettiest protest songs imaginable,? and PopMatters called it ?easily one of the best albums of the decade.? The album was released in Australia in early 2006.

In mid-2006 the band's lineup solidified again after a period of transition, with Clint Newman and Adam Gold taking over guitar and drum duties, respectively, for live shows, and contributing their multi-instrumental talents to a new round of ML recordings.

Their 2007 release, 30 Year Low, marks the end of Shannon McArdle's collaboration with the band (and her marriage with Timothy Bracy), to pursue other projects.

Full Of Light And Full Of Fire

If They Knew This Was The End

We're All In This Alone

Poems To A Pawnshop