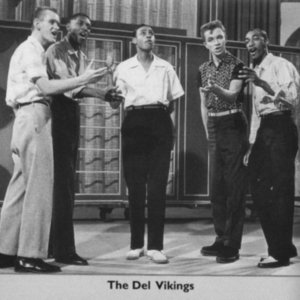 The Del-Vikings were formed in 1955 by members of the United States Air Force stationed in Pittsburgh, Pennsylvania, with Clarence E. Quick, Kripp Johnson, Don Jackson, Samuel Paterson, and Bernard Robertson. Because all of the members were in the armed forces, the group constantly ran the risk of being disrupted by members being stationed in other places. This happened soon after the group's forming when Paterson and Robertson were sent to Germany. They were replaced by baritone David Lerchey, the group's first white member, and tenor Norman Wright.

Originally signed to Fee Bee Records (1957), their first hit came in 1957 ("Ultra high Fidelity" DOT [EP] DEP - 1058) with the Wright-led "Come Go with Me & "Whispering Bells" + "Don't Be A Fool" & "What Made Maggie Run" (from the extended play "Come Go With Me" as by "The Dell-Vikings". Soon after, Jackson was out, and was replaced by Gus Backus, the group's second white member. The group quickly found itself in greater demand following the release of "Come Go with Me", which propelled the group into the Top 10 on Billboard's Top 100.

The Best Of The Del Vikings: The Mercury Years

The Best Of The Del Vikings The Mercury Years