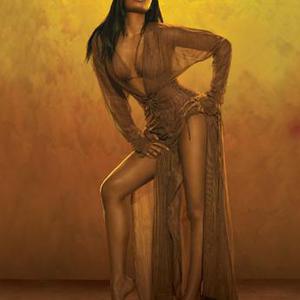 Syleena Johnson (born September 2, 1976 in Harvey, Illinois) is an R&B and Soul singer-songwriter and actress. R&B's best kept secret is finally out. Another chapter in Syleena Johnson's book has been written. This time, it is more than recording an album. After amicably leaving an eight-year record deal with Jive Records in 2006, Syleena has launched her own label, Aneelys Records (Syleena spelled backwards). This opportunity comes by way of a label deal with Federal/Universal Music Group.

R&B's best kept secret is finally out. Another chapter in Syleena Johnson's book has been written. This time, it is more than recording an album. After amicably leaving an eight-year record deal with Jive Records in 2006, Syleena has launched her own label, Aneelys Records (Syleena spelled backwards). This opportunity comes by way of a label deal with Federal/Universal Music Group.

Syleena previously worked with countless artists and producers such as R. Kelly, Bob Power, Kay Gee, Busta Rhymes, Cam' Ron, Common, Jermaine Dupri, and Twista. Kanye West blessed her with his production on "Bulls-Eye (Suddenly)," from Chapter 3: The Flesh. Syleena proved to be Kayne's saving grace as she provided last minute vocals on the hit, "All Falls Down," which led to a Grammy nomination for both artists.

Artists often fall by the wayside and are rarely heard after leaving a major record label. But, Syleena didn't allow her split with Jive Records to rip out any pages from her next chapter. She simply took matters into her own hands and decided to go the independent route. With her label, Syleena will finally see the benefits of all her hard work, whether it be working on a personal project or signing other acts. She will finally have the creative control and power to see things through and plan out her career as she sees fit.

With this control, Syleena will give birth to her newest release, Chapter 4: Labor Pains, due January 13, 2009. Along with running her own label and being an artist, Syleena has also become a wife and mother within the past year. "My husband is an excellent man, I couldn't ask for a better one and my son is my best work yet," Syleena says. Naturally, this experience lent a hand in Syleena writing Chapter 4: Labor Pains, as she describes the pain of having a baby as the worst pain in life, but rewarding in the end. Syleena shadows her life on the principle that you reap what you sow "Nothing good comes easy. All the struggle, strife, work and pain we go through, that's the price you have to pay to reap the benefits in the end," Syleena expresses.

As always, Syleena speaks on behalf of a woman's struggles. But, she leads off on a lighter note with her first single from, Chapter 4: Labor Pains, "It Is True." She sings a heavenly love ballad about new found, true love with her husband and the product of that love. "It is everything I felt about my husband when we first met, and now the love of my son follows suit," Syleena swoons. There's no denying that Syleena is passionately in love as she angelically sings "over and over again, in my dreams and in my head, I'm imagining you all in my future, us continuing through 'til we get older, and I swear that I've never met, a boy like you, a true soldier, my knight in shining armor, you saved me boy, you bring me joy and that's how I know it's true."

The buzz continues and the drama unfolds in Chapter 4: Labor Pains, as Syleena displays her songwriting and storytelling skills in "Shoo Fly," an alternative tale of baby mama drama. The story comes from the point of view of a woman with a man who has a baby mama and what that woman goes through when the baby mama wants him back all the while using the child as leverage. In the chorus Syleena sings, "so shoo fly he's mine, for the last time, don't make me say it no more, damn girl to move on, be gone, so long, get gone." This is a different angle giving the woman's perspective on baby mama drama. Other notable tracks on Chapter 4: Labor Pains are "Labor Pains," the title track which is dedicated to women and sisterhood, "My First," a grown and sexy song about a man who is the first to actually give good love and affection, and "Personal Trainer," a song about the mental stimulus of physical attraction.

While dealing with real issues, Syleena never strays away from God in her music. This signature approach is what makes her unique as she shows how God applies to every aspect of life. She tells the passionate, hard truth with a voice and spirit which has been anointed by God and speaks directly to the mind and spirit of women. "I always come from a spiritual view as a Christian woman in the real world, the here and now, the issues we as women have to deal with," Syleena testifies.

Chapter 1: Love, Pain, & Forgiveness, was the beginning of how God established a relationship and peace within Syleena. He then gave her the Garden of Eden in Chapter 2: The Voice. But she disobeyed Him and ate the forbidden fruit in Chapter 3: The Flesh. Now Syleena must pay the price, which is Chapter 4: Labor Pains. Biblically, labor pains are a woman's curse, but Syleena takes it all as a blessing. "At the end, I want people to feel uplifted and motivated, that's my goal. Not to just motivate people, but myself in the process," Syleena professes. Be prepared for the experience of Chapter 4: Labor Pains.

Despite releasing four albums, Syleena is more than a singer. She caught the acting bug and showed off her multi-dimensional talent by playing a significant role in Eric Jerome Dickey's Cheater's-The Stage Play in 2005. She also added modeling to her many talents as she modeled for Ashley Stewart after signing with Wilhelmina modeling agency as a plus-size model.

Johnson released her new album, "Chapter 5: Underrated" on September 27, 2011, which features Toxic (the producer behind Keyshia Cole & Monica's "Trust", as well as much of Twista's work number) and a number of other high-profile producers and artists. The albums' lead single titled "A Boss" was released on June 21, 2011.

I Am Your Woman: The Best Of Syleena Johnson