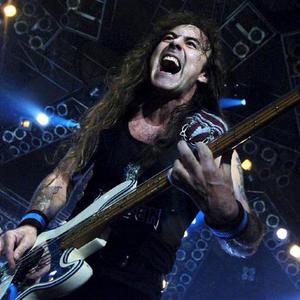 Stephen Percy Harris (born March 12, 1956 in Leytonstone, London, England) is the bassist and primary composer of the heavy metal band Iron Maiden. He founded the band as a teenager in 1975. Along with Dave Murray, they are the only members of the band that have appeared on all of the band's albums. He used to work as an architectural draftsman in the East End of London but gave up his job upon forming Iron Maiden. During the mid 1970s he was a youth team footballer for West Ham United.

(born March 12, 1956 in Leytonstone, London, England) is the bassist and primary composer of the heavy metal band Iron Maiden. He founded the band as a teenager in 1975. Along with Dave Murray, they are the only members of the band that have appeared on all of the band's albums. He used to work as an architectural draftsman in the East End of London but gave up his job upon forming Iron Maiden. During the mid 1970s he was a youth team footballer for West Ham United. He is a talented football player, and his bandmates say that if he did not play bass he would definitely have had a career in professional football.

A self-taught bass player, Harris's first bass was a copy of a Fender Precision Bass that cost him about ?40 when he was 17 years old. He went on to use a signature Lado "Unicorn" model and a late 1950s Fender Precision with RotoSound strings. He now uses his own signature RotoSound flatwound bass strings. This is surprising because flatwound strings do not sound clanky and bright. In fact, Harris' signature clanky bass tone comes from the metallic noise of the strings hitting the frets.

Harris has been influenced by other bass players such as Chris Squire of Yes, John Deacon of Queen, Mike Rutherford of Genesis, Geddy Lee of Rush, Andy Fraser of Free and John Mayall & the Bluesbreakers, Martin Turner of Wishbone Ash, Geezer Butler of Black Sabbath, and John Entwistle of The Who. One of his all-time favourite bass players was Pete Way from UFO, who was said to influence Harris' playing style greatly.

Harris' first band was named Influence, which was later renamed to Gypsy's Kiss. He later joined Smiler, of which all the band members were several years older than he was. He ended up leaving, as the members of the band made it clear that they did not care for a bassist who leapt around the stage and wrote songs. After Smiler, Harris went on to create Iron Maiden. Steve Harris got the name from seeing an Iron Maiden, a type of torture instrument, in the movie The Man in the Iron Mask.

Steve Harris is Maiden's principal composer and lyricist. Harris's songwriting has been noted for a galloping bass pattern and long songs with epic lyrics that feature many tempo changes. Influenced by 1970's progressive rock bands like King Crimson and Genesis, Harris frequently writes lyrics about mythology, history or topics inspired from books and movies. Harris has commented on the difference between 1970s progressive music (called "progressive") and contemporary progressive-style music (known as "prog"), a distinction which is becoming recognised.

Steve Harris is often considered among the best and most influential heavy metal bassists. He frequently writes bass lines with a 'gallop', a pattern consisting of three rapid notes ? one eighth and two sixteenths ? which he plays with two fingers. Before playing, Harris often greases his fingers, to make such 'gallops' easier to play, as shown on the bonus DVD for the A Matter of Life and Death album. Besides this he is very adventurous on the bass and and plays intricate accompaniment in many of Maiden's songs. He also uses power chords, which are relatively unheard of on bass, on several songs. Harris has also stated that he never uses a pick and that he never warms up before a show.

He plays a specially-painted bass guitar which has featured on every Iron Maiden album recorded. It is currently sporting the West Ham United F.C. logo. The guitar has gone through three colour changes since construction. Originally being white, it was then changed to black, then blue, and is currently cream with the rim done in West Ham's light-blue, and the club's logo on the body. The pickguard is metallic. He is also known to use a West Ham United football scarf to cover his strap

In addition to bass playing and writing music/lyrics for Iron Maiden, Steve Harris has taken on numerous other roles to support the running of the band such as:

Steve Harris has been Iron Maiden's principal keyboardist (other than at live shows and on a few songs where the work has been done by Michael Kenney who doubles as his bass technician) since keyboards were first used by the band on the album Seventh Son of a Seventh Son. Though since that album keyboards have played less of a role in Iron Maiden (usually), the complexity and speed of the playing has increased as Harris has improved. Initially he was not even credited for it in the band credits, just the album ones.

For the album Somewhere in Time, Harris made his first experimentation with synthesised sounds, playing the bass synth (later on the Seventh Son of a Seventh Son album referred to as 'string synth'). He has also done so on subsequent albums, although it has not featured as much as it did on Somewhere in Time because of the band's less synthesised sounds and also the use of keyboards.

While he plays keyboards during the recording of Iron Maiden albums, Steve Harris has apparently shown a lack of ability at drumming. At times he has been known to demonstrate to Nicko McBrain what he wants Nicko to play, and, as Nicko put it, sounded 'as good as your gran'. In The Early Days documentary he revealed that he originally wanted to be a drummer, but as he lived with his grandmother he didn't have enough room for a drum-set.

Steve Harris is also known for playing an increasing role in mixing Iron Maiden's albums as well as producing them, and has done the work himself since Fear of the Dark. Harris also directs and edits many of the band's music videos, particularly live ones. He also owns a farm with music recording facilities. Harris' land has been used to write Maiden's albums on numerous occasions.

* Harris designed Iron Maiden's first logo which used the current Maiden Font, seen in all of their album-releases.
* Given that Harris had been the centre of attention in Maiden's early gigs the addition of Bruce Dickinson to the band's line-up originally caused small scuffles between the two as they both wanted to be at the centre of the stage. Bruce mentioned in The Early Days documentary that Harris occasionally elbowed him away, and he returned the favour by causing Harris to trip on his extra-long microphone stand.
* The darker tone of the album The X Factor has often been attributed due to problems in Harris's personal life while making the album. He had recently divorced and his father had also died.
* His oldest daughter, Lauren Harris, is also a singer and she released her debut album Calm Before The Storm on May 2008. She supported Iron Maiden on their A Matter of Life and Death tour and Somewhere Back In Time tour.
* In 1996, Harris had a signature bass sold by Fender. It was the Steve Harris Signature P Bass. It has a basswood body colored in lake placid blue, with a maple neck and bassline pickups. It is no longer made and very hard to find.