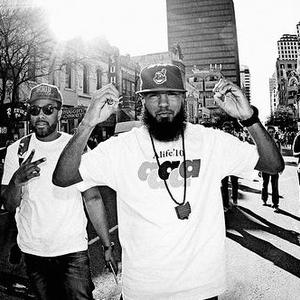 Kyle Myricks (Born in Massillon, Ohio, United States), better know by his stage name Stalley is an American rapper. currently signed to Rick Ross's label, Maybach Music Group, who started his rap career after major injury setbacks in Basketball. Stalley shifted his focus towards music and in 2008 he teamed up with Ohio's DJ, Terry Urban to release his first mixtape titled Goin' Ape. This followed with several mixtape releases in 2009, MadStalley: The Autobiography, 2011, Lincoln Way Nights, and 2012's release, Savage Journey to the American Dream.

He left home to play Division 1 basketball in Michigan, injuring himself shortly after. That setback brought him to New York to play for Long Island University, but a second injury derailed his athletic plans and he changed his focus to music. In 2008, he connected with Ohio's own, Terry Urban on the mixtape release "Goin' Ape." He also toured as an opening act for Mos Def. His second project MadStalley: The Autobiography brought attention to his transition from small time griot to rap star. He's since worked with brands like Nike, ESPN, 10Deep and Mishka. Currently, Stalley has been working with Creative Control, the media collective associated with Dame Dash, DD172 and fellow rap artist Curren$y. His recent release titled Lincoln Way Nights (Intelligent Trunk Music), he carefully illustrates a typical night out on his popular hometown strip. He's appeared on BET's 106 and Park as a part of the Music Matters campaign and premiered his video for "SLAPP" on the countdown.

Reflection Of Self: The Head Trip