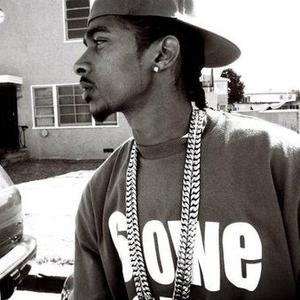 You already know what it is. From the way he greets you, to the words that he speaks. The uniform he wears is bold, aggressive and absolutely intimidating. He's authentic ? the offspring of the West Coast's most celebrated talent ? yet and still a novelty all his own. In an industry that's fallen victim to bubble gum lyrics and erroneous dance fads to match, he's the spokesperson the block wants for. He's the sociopolitical outrage of Ice Cube and N.W.A. He's Snoop Dogg before you knew his name and Ice T after an unexpected knock at 6 o'clock in the morning.

He's the very definition of Slauson & Crenshaw ? a self-inspired movement and a name you can trust. He is Nipsey Hussle.

Nipsey Hussle emerged from the streets of Los Angeles and as the first signee to the Cinematic/ Epic Records joint venture, is effectively building momentum as a rising emcee while sacrificing the only way of life he's ever known. ?I try to keep a balance with my career and who I am aside from that,? says Nipsey. ?It's kinda hard, but I try to stay the same and balance both worlds. You don't wanna forget where you come from and at the same time, you don't wanna miss your blessing tryna live the same lifestyle you been livin'.?

All in anticipation of a fall ?09 debut, his street singles ?They Roll? and ?Bullets Ain't Got No Name,? both featuring The GAME, are lyrical proof that Nipsey Hussle is here to stay. In addition to the GAME, the album is slated to feature the likes of Snoop Dogg, Sean Kingston, Lloyd and Nipsey Hussle's own Slauson Boyz . South Central State of Mind is a healthy dose of honesty, reality and life from an authentic perspective.

?The perspective from LA is from Snoop and Ice Cube and them,? Nipsey says. ?Them dudes is grown. They did they stuff, but they out of that element now. They on some other shit. So it's like people want to hear what's going on in the streets [now] and that's what I'm providing with this record.?

Admittedly a creative spirit born to unceremonious circumstances, Nipsey Hussle earned his moniker by absorbing all the hood had to offer and profiting from it tenfold. It was his sense of urgency that kept him alive and well. By the time he was 13 he had learned all the inner workings of a production studio and traveled daily to the Watts Towers Studio to perfect his engineering interests. His childhood innocence, however, didn't last long and he was eventually forced to fend for himself.

?When I came into my manhood and I had to make real decisions,? Nipsey remembers. ?That's when I fell real heavily into the bangin' and the hustlin' and the streets, and was doin' everything under the sun. That's when I said, ?Forget the music.'?

Nipsey yielded to the trappings of the hood, becoming every bit the ghetto celebrity. He set up shop, opening up a clothing store in South Central and imposed his will on the streets. His lifelong passion however, wouldn't let go. So, without the benefit of knowing whether or not his artistic career would flourish, he took a chance and sold all his material possessions. From cars to $20k worth of jewelry, rims and more, Nipsey submitted to music and invested in a studio of his own.

He recorded his first mixtape, Slauson Boy, Volume 1 and subsequently incorporated Slauson Boy Records. Various performances, including the famed House of Blues would follow, as did major radio/street promotion and a blazing hot record, ?Bullets Ain't Got No Name.? His interest in the fortunes of the streets though, refused to cooperate. ?It was like, I kept going back,? he remembers. ?I would go to the studio for a couple of months and then I'd go back to the streets.?

Expectedly, the in and out procedure disrupted Nipsey's surge toward artistic freedom. He wasn't making the kind of money he was accustomed to and his lavish lifestyle was suffering over the ?career that could be.? To make matters worse, he and his older brother lost all their studio equipment to a police raid. All but forced to hustle and recoup, Nipsey developed a ?love/hate relationship? with his music.

Within weeks Felli helped negotiate a deal between Nipsey's manager (Big U of Uneek Music) with Jonny Shipes and Cinematic/Koch/Epic Records. Shortly thereafter, the Slauson Boyz arranged a flight to Ocho Rios, Jamaica to celebrate. Upon returning two weeks later, reality set back in as police raided his clothing store a second time, claiming he was in violation of his probation terms.

?I went from havin' a fat advance check and ridin' jet ski's in Jamaica, to sittin' in the county jail on a shoe program 24 hours a day,? he says. ?So it kinda put everything in perspective once again and had me sittin' with my thoughts and myself to see exactly what I wanted to do with myself.? Nipsey's sudden success created an excuse for envious law enforcers to seek him out. He'd become a walking target for the ?boys in blue' and a beacon of hope for baby loc's like him.

Nipsey was ultimately exonerated on all charges and released in February of 2008. Unsurprisingly, he resumed working on his debut immediately ? one that has been met with open arms from the self-proclaimed King of the West Coast and Damu affiliate, The GAME, among others.

?The album is the missing ingredient. It's what ain't been said,? Nipsey tells. ?I feel it's what everybody is waiting to hear. It's the new perspective as far as the streets. I can't speak on nuthin' else right now, cause I'm not fully familiar with nuthin' else. I been a few places, but I know the streets like the back of my hand.?

GAME's contribution comes twofold, delivering 16's on the California classic gangsta riddled ?They Roll? and then again on the street favorite, ?Bullets Ain't Got No Name.? The latter, which features a ?Rock the Boat? (Aaliyah) stirred melody, hints at Nipsey's musical ingenuity. ?I was really just paying attention to the game [when] I made the record and dudes wasn't sayin' nuthin'? just a lot of hooks and R&B type shit,? he explains. ?That was really just my take on it creatively and what the record is talkin' about is some LA gangbangin' shit.?

Nipsey's creativity sprouts in full bloom on the QD3 produced ?I Don't Give A ?? ? a haunting, almost ethereal take on the responsibility of a Rolling Sixty Crip all but forced to bang. My mama wanna know why I'm bangin'/ she told me I'ma lose my life/I ain't trippin' I'm a crip and I'ma do it right/? if I died and came back I'd do it twice/ Brainwashed by the block it consumed my life? Nipsey spits, further explaining, ?That's me gettin' at my moms and kind of explaining why I do what I do. It's not a negative song. It's just what it is. It's just to give her some clarity. A lot of dudes that's out here on the streets, they relate to it.?

And then there's ?Rap Music,? a bona fide spill that tells the story of South Central's pride and joy. ?That's basically talkin' about how rap music saved a dude's life and how it coulda went either way for me,? Nipsey says. ?Dude's gon' hear that and understand who I am and what I came from, and what I went through to get this shit.?

Racks In The Middle (CDS)

Bullets Ain't Got No Names Vol. 3

Bullets Ain't Got No Name Vol. 2