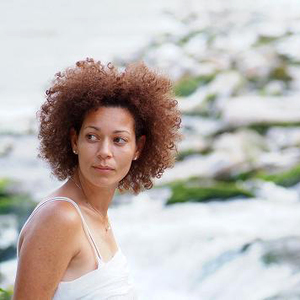 Rosalia De Souza was born in Rio de Janeiro, in the Nilopolis district famous for its samba Beija-Flor. The great passion for music was cultivated by her father. In 1989 she arrived in Italy and a short time went by before she started studying at the ?Scuola Popolare di Testaccio? in Rome, (Popular school of Testaccio, Roma), taking classes in musical theory, Cuban percussions, jazz and jazz history.

Throughout this first year she also started to work with Brazilian artists, guitarist and bassist Alvaro Dos Santos, Ney Coutinho, Roberto Taufic and the Roman pianist Giovanni Guaccero who gave her the possibility to sing in the most important jazz clubs of the capital. Her typical ?repertoire? included classical Brazilian authors like Tom Jobin, Baden Powell, Joao Gilberto, Sergio Mendes, Edu Lobo, Joyce, Toquinho, Vinicius De Moraes, Djavan, Caetano Veloso, Gilberto Gill, Chico Buarque, Milton Nascimento and many other less renown artists. In 1994 she met DJ and Producer Nicola Conte and took part to the Fez project. In 1995 she participated in the making of the album ?Novo Esquema da Bossa? by Quintetto X; (Schema rtcd402). This album has an exquisite Brazilian taste and a marvellous version of ?Senza Paura?. In 1997 she collaborated with ?Intensive Jazz Sextet? (Schema sccd302) with an incredible interpretation of ?Supergiangi va in Brasile? in the album ?Today's Sound?. In June 2000 she participated at the Brazil Festival at the Barbican Center in London with talented jazz musicians: Pietro Lussu, Pietro Ciancaglini and Lorenzo Tucci. There she met ?Les Hommes? with whom she participated, with the addition of trombonist Gianluca Petrella, at the Fez Jazz Festival in Bari. Rosalia and Les Hommes gave also greatly appreciated performances at the International Lounge Festival in Cesenatico, at the Summer Lounge Festival and at the Jazz Cafe in London. With Schema Sextet and Nicola Conte she was called to represent Italy at the Montreux Jazz Festival in 2001. She closed with a wonderful concert the Summer Lounge Festival in Cisternino, Italy. ?GAROTA MODERNA? is the debut album by Rosalia De Souza, released in 2003, was followed in 2004 by ?GAROTA DIFERENTE?. An album containing nujazz revisitations by Five Corners quintet, Big Bang, Povo, Tr?by Trio, Raw Deal, Zero dB, Buscemi, Stateless as well as the Italians Gianluca Petrella, Gerardo Frisina and The Dining Rooms. ?BRASIL PRECISA BALAN?AR? is her second amazing album. A recording that took place entirely in Rio de Janeiro under the supervision of Roberto Menescal, a legendary Bossa Nova maestro. This album marks Rosalia's growth through the return to her country's original music. Collaborations include the great Marcos Valle; Toco and Roberto Menescal himself. A new mesmerising album from the Carioca artist.