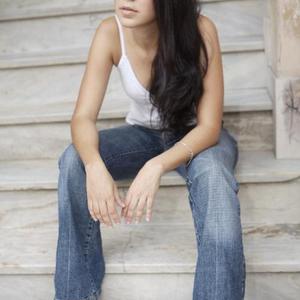 Described as the first contemporary Brazilian album that measures up to the Brazilian classics of the past, "Equilibria" is the debut recording from hotly-tipped singer-songwriter Sabrina Malheiros. Born in Rio 26 years ago, Sabrina presents a sublime mix of bossas and sambas with touches of R&B and electronica. "Equilibria" combines timeless Brazilian songwriting with contemporary beats to produce this year's hottest Brazilian debut.

Despite her youth, Sabrina's musical experience is vast. This comes as no surprise given her musical lineage. Sabrina is the daughter of Alex Malheiros, bassist from legendary Brazilian band Azymuth. Her grandfather played with Sergio Mendez and was the first Brazilian to manufacture an electric bass, whilst her uncle was the premier violin craftsman in Brazil. Sabrina is in no doubt of their influence: "I grew up listening to Azymuth; their music is fixed in my life. My master is Jo?o Gilberto, in fact my favourite childhood toy was a Jo?o LP that I took with me everywhere!"

At the age of 6, Sabrina was enrolled in Rio's premier music school and by 12, she had made her recording debut singing lead vocals on the title track of Azymuth's 1991 album, "Curumim." Such was its success that opportunities to record backing vocals for various Brazilian artists came flooding in. Sabrina continued with her studies, eventually graduating to the music academy set up by legendary Brazilian composer Eduardo Villalobos--yet she continued to record and perform. At 19, Sabrina recorded with acclaimed Japanese Acid Jazz act United Future Organisation, then a second guest appearance with Azymuth. She recorded 4 songs for a movie soundtrack, including the highly successful lead track, "Dancing in Rio," with Paulo Williams. In 2002, Sabrina was invited to perform on "Super?gua," a track produced by famous Brazilian DJ/Producers DJ Jonas & Ulisses Cappelletti. This slice of Balearic bliss was licensed to many chill-out compilations worldwide, eventually becoming a dance floor monster. It is during this time that Sabrina began working on her debut recording.

With seven sambas and six bossas, "Equilibria" is pure and simple feel-good Brazil from start to finish. Sabrina wrote or co-wrote nine of the 13 tracks on the album at home with her father, giving "Equilibria" a warm, intimate vibe. The track "Saudade Rio" is a peon to the city Sabrina calls home and whose influence runs throughout the album. "I was born in Rio," she says, "the city of samba, and I've always listened to this music as long as I can remember. Whether it's Sergio Mendes or Banda Black Rio, Ana Mazzotti or Marcos Valle, samba and bossa are part of my life. With my father in Azymuth and my grandfather with Sergio Mendes, I have always been surrounded by the samba beat!"

"Equilibria" is Sabrina's first recording for the highly acclaimed Far Out label, the home of Joyce and Marcos Valle. And as you'd expect from Far Out, the album features an all-star Brazilian cast including all 3 of Azymuth--Alex Malheiros, Jose Roberto Bertrami, and Ivan Conti--as well as legendary Brazilian percussionist Cidinho Moriera. Also featured is London-based Bluey, from Incognito, while his son, DJ Venom, takes over production duties--combining that warm Incognito sound with cutting-edge electronica and the essence of Brazil: samba!

"Equilibria" contains the original version of the dancefloor smash "Estacao Verao," originally released last summer. With its firing Kenny Dope remix, the single earned critical acclaim and became the best-selling Far Out 12 ever. As world-renowned producer/DJ Rainer Truby says, "it's a top-notch original, a real little gem, and has a dope Dope rework taking it to the floor!"

Following hot on its heels comes the second single from "Equilibria": "Maracatueira," an Incognito remix that takes the samba and turns it into an uplifting bossa-jazz-house anthem. Bluey, the master of British Jazz Funk, is on killer form and it also features none-other than Ski Oakenful on keys and DJ Venom on mixing duties. From the euphoric string reprise that opens the "Main" mix, you know this is one epic tune--the insistent boss beat, sweeping strings, Bluey's guitar licks, and Ski's reflective keys, make this a tune guaranteed to let the sunshine in.

As the name suggests, "Equilibria" is the perfect mix, classic Brazilian songwriting combined with contemporary production--guaranteeing this album's appeal for both established Far Out fans as well as anyone into the sound of Nu-Brazil. The combination of Sabrina's youthful exuberance and her father's 30 years of song-writing experience makes for an accomplished debut that's set to be the cross-over Brazilian album of 2005.