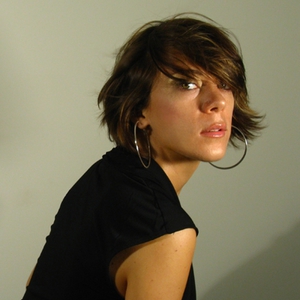 Gretchen Parlato's voice is a thing of wonder. Striking the ideal balance between precision and flexibility, she is never predictable, blurring the lines between singer and instrumentalist as she takes a lyric--and at other times improvised flights of wordless fancy--to places it's never before been. On In a Dream, her debut album for ObliqSound, which released August 25, 2009, Parlato and her intuitive support team reinvent constantly, Parlato impeccably articulating in a voice so ethereal that the listener might very well feel that he or she is "in a dream."

Coming four years after her self-titled debut, In a Dream finds Parlato embarking on a beguiling journey deep into the heart of both her own compositions and classic material by the likes of Stevie Wonder, Duke Ellington, Herbie Hancock, Wayne Shorter and others--all of which she instantly makes her own. Each song emerges as a unique world unto itself, yet there's an undeniable thread linking them all together.

Aligning with a virtuosic quartet she describes as "inspiring, creative, sensitive, musical souls"--Lionel Loueke on guitar, Aaron Parks on piano and Fender Rhodes, Derrick Hodge on acoustic and electric bass, and drummer Kendrick Scott--Parlato brings the warmth and compelling command of her much-heralded live performances to 10 exquisite new peeks into her artistic personality. In a Dream firmly places Gretchen Parlato in the upper echelon of today's vocal artists.

Both Hancock and Shorter are already fans. Hancock has said that Parlato has a "deep, almost magical connection to the music," and Shorter has said "in an inconspicuous way, Gretchen plays the same instrument as Frank Sinatra."

Michele Locatelli, the album's producer and co-founder of ObliqSound, notes that Parlato's desire to blend a broad range of musical influences sets her apart. "Even though her means of expression is jazz-based, it goes beyond that. The defining thing about her, however, is her subtle sense of rhythm and timing: she makes a song seem easy when it's not."

From the opening number, her interpretation of Wonder's "I Can't Help It," best known via Michael Jackson's rendition, Parlato's extraordinary vocal calisthenics, immaculate sense of timing and nuanced phrasing are in full bloom. Parlato transforms the song into a breathy neo-bossa nova, joined solely by Loueke's closely intertwined, sweet guitar lines and vocalized percussion and bass accompaniment. "The song just grew organically and has continued to develop every time we play it," Parlato says.

The song list runs the gamut from classic Brazilian--"Doralice," learned from the legendary singer/guitarist Jo?o Gilberto--to the flowing "Turning Into Blue," penned by the bassist Alan Hampton, with lyrics by Parlato based on Buddhist teachings. The way in which she stretches out the word "turning," then catches up with "into blue" is indicative of Parlato's innate ability to work miracles with a lyric and hold the listener's attention via her ingenuity. Ellington's "Azure," says Parlato, "taps into that dreamlike state we can be in when we long for someone and feel completely alone. I love to reveal the beauty in the darkness." Performed in a 5/4 rhythm, the track features a stunning bass solo by Hodge.

Hancock's "Butterfly," she says, "is about the beauty of simplicity and space. I arranged it so that we could play around rhythmically, while still allowing the lyrics to shine through." In this arrangement, Parlato stays on top of the groove without deviating, even while exploring every nuance it has to offer. Shorter's "ESP," not surprisingly the purest jazz track on In a Dream, eases in via meditative vocalizations and ultimately gives way to Parks' spellbinding Rhodes solo and intricate drum work from Scott. The title track, with music by the young pianist Robert Glasper and lyrics by Parlato, is appropriately dreamy, a groove-based, harmony-rich rumination on the otherworldly quality of being in love.

Two tracks, "Within Me" and "On the Other Side," arrived via guitarist Francis Jacob. On the first, Parlato's vocal sneaks in with a whisper, then barely rises, yet remains dynamic and alluring. Appropriately introspective, she drills deep inside of the lyric and instinctively delivers it the way it begs to be delivered. The latter song is more rambunctious, a tight weave of precision, melody and heart. "Weak," which closes the album, was originally performed by the R&B trio SWV in 1992. Says Parlato, "I thought it would be cool to sing this song in a new way and have people say, 'Wait, why do I know this?'"

The theme of the album's title, In a Dream, runs throughout each song. "Every song has a purpose, relates to my life in some way, and tells a story," Parlato explains. Her own story begins in Los Angeles, where she was born into a highly artistic and musical family that shaped her ears. In her youth, Parlato soaked up every sound that came her way, from rock and pop to classical, musical theatre, soul and R&B and, especially, African percussion and the sensuous rhythms of Brazil--all of which worked its way into her nascent style. Jazz gained a special foothold in her musical life because, she says, it forces an artist "to figure out who you are and find your own voice."

Her talent became apparent in her early childhood--in fact, In a Dream includes a handful of snippets of Parlato belting out songs in perfect rhythm and remarkable pitch at age 2! "I thought it was fitting to try to work these early recordings in with my current music, because it shows the first steps of my musical path, who I am, where I come from," she says. "It makes me realize that music was in me since the very beginning, I had no choice but to pursue it and share it."

As she grew, Parlato's musical abilities blossomed. She attended the L.A. County High School for the Arts, later graduated from UCLA with a BA in Ethnomusicology/Jazz Studies, then went on to attend the Thelonious Monk Institute of Jazz Performance, as the Institute's very first vocalist. That was followed by a 2003 move to New York to pursue her dream. A year later, Parlato won the prestigious Thelonious Monk International Jazz Vocals Competition and, in 2005, self-released her debut.

In the years since, Parlato's star has only risen. She's toured internationally with her own band and as a guest of many A-list artists; notable performances include La Villette in Paris with Wayne Shorter as her guest, the Hollywood Bowl with Oscar Castro-Neves, Gal Costa, Ivan Lins, and Dianne Reeves, and the John F. Kennedy Center for the Performing Arts in Washington D.C. Her recording credits include Terence Blanchard's 2005 Grammy-nominated album Flow, Kenny Barron's The Traveler, and Esperanza Spalding's 2008 self-titled album. She was recently featured in The Documentary Channel's 4-part series "Icons Among Us: Jazz in the Present Tense," and in a special called "Rising Stars" on Japan's NHK-TV, with a one-hour focus on Parlato. Glowing reviews have followed her around, such as the one from the New York Times' Ben Ratliff that singled out her attention to rhythm and dynamics, and proclaimed, "It's evident that she's an extraordinary singer."

Adds Lionel Loueke, "She is the only singer that I never have to account for or change the way I play; the guitar and the voice are so well balanced that no one is ever out in front." That is in fact true of each of her accompanists. Inherently aware of the leader's ability to find herself within a given song, the musicians instinctively find their place alongside her and serve to accent Parlato's fine-tuned arrangements.

Parlato is understandably proud. "I sing from my heart and soul and hope that people feel that. I just want them to feel something. That could be joy or sadness, as long as it moves them in some way." Anyone who is not moved by In a Dream is quite possibly incapable of moving at all.

The Lost And Found